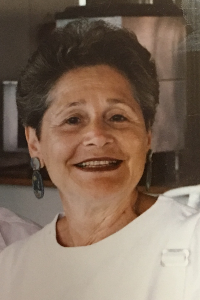 Athina “Tina” (Nanchu) Kotseas, 86, of Worcester, passed away Monday, September 25th in Milford Regional Medical Center surrounded by her family.
Her husband of 57 years, Paul Kotseas died in 2007. Tina leaves two sons, Harry P. and his wife Sharon of Auburn, John M. and his wife Cosette of Northwood, NH, and a daughter, Patricia L. Giannopoulos and her husband Bill of Whitinsville; two sisters, Helen Yanowitz and her husband Bernie of Bethesda, MD and Dorothy Nanchu of Worcester; sisters-in-law Kay Nanchu and Venus Peters both of Worcester, Mary Angelis of Florida, and Georgia Anthony; brother-in-law Steve Maintanis of Auburn; seven grandchildren, three great-grandchildren and many nieces and nephews. She was predeceased by her brother, James Nanchu.
Tina was born in Dudley the daughter of John and Vasiliki “Bessie” Nanchu. As a teenager, she met the love of her life, Paul, at a church picnic, and they later married on May 21, 1950. Paul and his brother owned and operated Phillips Market in Auburn and Whitinsville, while Tina lovingly cared for their three children. Always yearning to help others, Tina waited until her kids were raised before fulfilling her lifelong dream of becoming a nurse. At the age of 50, she graduated from Quinsigamond Community College with a nursing degree, and went on to work as a Registered Nurse at Memorial Hospital.
After Paul retired they enjoyed spending time on Cape Cod with their family and grandchildren, and camping throughout New England in their motorhome. Tina always had a smile on her face, a tune to hum, and a joke to tell. She will be remembered as a loving wife, mother, aunt, sister, “YiaYia”, and friend.
Her funeral is Wednesday , September 27th, from O'CONNOR BROTHERS FUNERAL HOME, 592 Park Avenue, with a service at 11:00 a.m. In St. Spyridon Greek Orthodox Cathedral, 102 Russell Street. Burial will follow in Hope Cemetery. In lieu of flowers memorial contributions may be made to St. Spyridon Greek Orthodox Cathedral Building Fund, 102 Russell Street, Worcester, MA 01609.