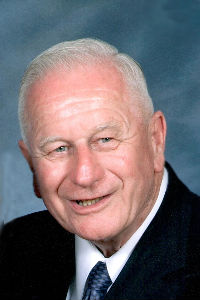 This was the call that Robert Fenby answered more than 60 years ago and so faithfully followed throughout his dedicated career as a minister. Rev. Robert F. Fenby, a longtime area minister died peacefully on Sunday, September 24, 2017 at Saint Francis Home, Worcester. He was 85.
Bob was born and raised in Quincy, a son of the late George and Edna (Ellis) Fenby. He graduated from Quincy High School, New England College, Henniker, NH and the Hartford Theological Seminary, Hartford, CT. He continued his theological studies by attending Pastor’s school at Furman University, Greenville, SC. A proud veteran of the US Navy, Bob was stationed in Newport, RI. and served as the assistant to the Chief Chaplain of the destroyer fleet for 3 years.
As a young minister, Bob first served the Dane Street Congregational Church in Beverly, for four years. He then was called to the Hadwen Park Congregational Church in Worcester, where he as pastor for 34 years, before retiring in 1998. Following his retirement, Bob began a new ministry with the Bethel Lutheran Church in Auburn through an agreement with the Congregational and Lutheran Churches in Massachusetts. He went on to serve that congregation for the next 12 years until his retirement in 2010. Bob’s gentle caring personality and guiding influence was well received, not only by the members of the congregations, but also by the members of the entire community. In addition to the many hours he dedicated to the boards within both congregations, Bob willingly gave many hours of service to numerous other community boards and organizations through the years. He was a member of the Board of Directors of the Auburn Youth and Family Services, the chairman of the Worcester and Auburn CROP Walks and the chairman of the Auburn Walk for Hunger. Among the church organizations and boards he participated in, he was a member of the Auburn Clergy Association, several committees with the Massachusetts Council of the United Church of Christ and the past president of Worcester Council of Churches. He also served as dean of the Deering Conference Camps and worked with the Massachusetts Conference canoe trips to the Allagash in Maine. He was a proud member of the Joel H. Prouty Lodge of Masons in Auburn, where he was chaplain for many years, and a master counselor of DeMolay. Among the several accolades and awards bestowed upon Bob, he was most proud of being chosen as the John E. and Ethel E. Riley Outstanding Citizen Award as well as the Children’s Friend Award from the Auburn Youth and Family Services and the God and Country Award from the Boy Scouts of America. Though he spent many hours away from his family, Bob’s heart was always at home; supporting his daughter Pam with school or outside activities or as a sideline supporter to his two grandsons during their school events and many baseball games.
Bob’s warm, welcoming spirit and gentle smile will never be forgotten and will be missed by many, including his loving and devoted wife of 61 years, Leona "Lee" F. (Ciardelli) Fenby his daughter, Pamela A. Lazerick and her husband, John and their two children, Zachary Robert and nGabriel John Lazerick of Auburn.
Relatives and friends are invited to Bob’s life celebration and memorial service on Friday, September 29 at 11 a.m. at the Bethel Lutheran Church, 90 Bryn Mawr Avenue, Auburn. A reception will follow in the parish hall. Burial with military honors will be held privately in Hillside Cemetery. Donation in Bob’s memory may be made to the Memorial Fund, Bethel Lutheran Church, Auburn. Arrangements are
under the care of the CALLAHAN, FAY & CASWELL Funeral Home, 61 Myrtle Street, Worcester. To share a memory or leave an online condolence please sign the guest book.