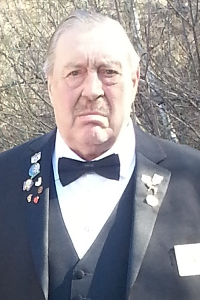 North Grosvenordale, CT – Carl R. Johnson, 73, died unexpectedly in his home on Monday, September 18th after being stricken ill.
Mr. Johnson is survived by his wife of 52 years, Margaret “Peggy” (O’Connell) Johnson; his three children, Timothy C. Johnson and his wife, Sandra of Cherry Valley, John R. Johnson and his wife, Renee of Tucson, AZ and Tina M. Mansfield and her husband, James of Spencer; a sister, Anna L. Graham of Huntington, MA; 12 grandchildren; 4 great grandchildren and nieces and nephews.
Carl was born in Worcester, son of the late Carl W. and Gladys Agusta (Petterson) Johnson and is also predeceased by a brother, Richard Johnson.
Mr. Johnson worked for the City of Worcester for 22 years as a school bus monitor and also served as the union steward for the MEA.
Carl was a member of the Worcester Lodge of Elks #243 where he was currently an officer, serving as the Lodge Tiler. He worked for various companies, prior to the City of Worcester as a steel worker and was the vice president of the United Steel Workers Local #2936.
A funeral service will be held on Friday, September 22nd at 10AM in the Alfred Roy & Sons Funeral Home 12 Hammond St. Worcester with burial to follow in Worcester County Memorial Park, Paxton. Calling hours will be held on Thursday, September 21st from 5 to 7 PM with the Worcester Lodge of Elks performing a ritual at 6PM. Memorial contributions in memory of Carl may be made to the Worcester Lodge of Elks 233 Mill Street Worcester, M A01602.
To share a memory of Carl, sign the online guestbook, or for directions please visit www.Royfuneral.com