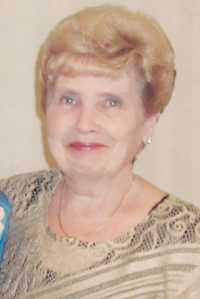 She was born on August 19, 1941 in North Uxbridge and raised in Linwood, the daughter of Henri and Jeanne (Brochu) Isabelle. She attended Good Shepherd Elementary School in Linwood and St. Mary’s High School in Uxbridge.

Dorothy was a waitress at Dave’s Restaurant in Uxbridge for many years. She later worked at Bartlett High School in food service and completed her career at Hubbard Regional Hospital in the cafeteria preparing food and working the cash register. She retired in 2006.

She was a communicant of Sacred Heart of Jesus Church and a member of its Ladies of Saint Anne. She was a weekly adorer at the Blessed Sacrament Chapel. She volunteered for parish festivals and working at bingo. She was a woman of great faith.
Family was everything to her. Dorothy was an amazing mother, grandmother, daughter, sister, friend and neighbor–an all-around wonderful human being who spread compassion and love to all she met. She was awarded “Spectator of the Year” and was her children’s BIGGEST fan at sporting events and musicals. She took care of her parents in their final days.

The funeral will be held Friday, Sept. 22, from Scanlon Funeral Service, 38 East Main Street, with a Mass at 10:00 AM in Sacred Heart of Jesus Church, 16 East Main Street. Burial will be in St. Mary’s Cemetery, Uxbridge. Visitation will be from 5:00 to 8:00 PM Thursday, Sept. 21, in the funeral home. Donations in her name may be made to either St. Jude Children’s Research Hospital, 501 St. Jude Place, Memphis, TN 38105 or to the Alzheimer’s Support Network, PO Box 839, Southbridge, MA 01550. Arrangements are under the direction of the Sitkowski & Malboeuf Funeral Home.