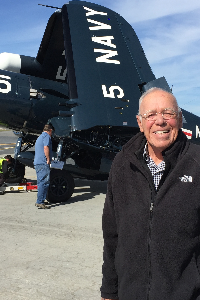 Kenneth H. Wehmann, affectionately known as “Pops” or “Ken”, of Grafton, MA passed away on September 12, 2017 surrounded by his family.

Born on September 3, 1943 to John and Adelaide Wehmann, Ken was a man’s man and a family man with an affinity for patriotism and class.

After graduating from Wayne High School and Fairleigh Dickinson University in New Jersey, Ken married the love of his life Christine Leuzarder in 1965. Shortly after getting married, Ken was called to one of the greatest honors of his life and joined the U.S. Navy as an Officer. He traveled the world, proudly served his country, and was discharged with honors after 3 years.

Of course, his greatest honor was being a father to his daughters, Christine and Heather, and Pops to his 6 grandchildren. Other than the Patriots or golf, it was all he talked about. And for countless years, Ken was the epitome of a devoted father and grandfather. Whether it was a family dinner at Linguine’s, a football game at Grafton High School, or simply a beautiful summer afternoon enjoying a cold beer on one of his daughter’s patios, Ken never missed a moment to be with his family.

Ken is survived by his wife, children, and grandchildren whose accomplishments were shared with everyone he encountered: Christine, his wife of 52 years; Christine, his oldest daughter (fiancé Jack, children Kate, John, Haley, and Ryann); and Heather, his youngest daughter (husband Joe, boys Benjamin, and Cooper and grand dog Harper); nephews John and William and cousins Paul and Irene; and many in-laws, nieces, nephews, friends, and family too numerous to list but not forgotten. Today, Ken is reunited with his parents and his beloved brother, Howard.

In the last few years of his life, Ken bravely fought pancreatic cancer and during that time, experienced love, support, and kindness from all walks of life. In lieu of a service and as a thank you to the members of MetroWest HomeCare & Hospice, 200 Nickerson Road, Marlborough, MA 01752 (www.mwmc.com)

Ken’s family asks that you pay it forward: perform a random act of kindness for someone in need and think of Ken.

Ken will be buried in Arlington National Cemetery with full military honors sometime in the spring.