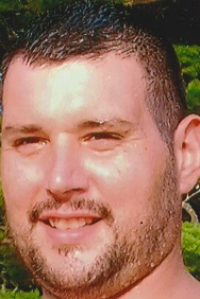 Thompson, CT.
Jason R. Jalbert, 39, passed away Tuesday, September 5, 2017 at U.Mass/Memorial Hospital, University Campus in Worcester.
He leaves his wife of 5 years, Audrey A. (Zalewski) Jalbert, a step-daughter, Alysha Bugbee both of Thompson, his father, Armand L. Jalbert and his wife Kathleen of Webster, a sister, Tracy Jalbert of Worcester and his maternal grandparents, Frank and Dorothy Vegnone of Webster.
Jason was born in Worcester son of the late Deborah A. (Vegnone) Jalbert who died in 1987. He lived in Webster for many years, before moving to Thompson. Jason was a graduate of Bay Path Regional Vocational High School and was the owner of Masonary Services over 15 years. He was a master mason and known as’ Jason the Mason’ and enjoyed his work and to satisfy all his customers. Jason enjoyed mountain bike riding.
A Celebration of Jason’s Life will be Friday, September 15, 2017 at 10:30 AM in the Oak Hill Bible Church, 40 Sacarrappa Rd., Oxford. The family will meet with relatives and friends from 10-10:30AM prior to the service at the church.
Flowers may be sent or Memorial Contributions may be made to the charity of one’s choice.
The ROBERT J. MILLER FUNERAL HOME and LAKE CHAPEL, 366 School St., Webster is directing and assisting Jason’s family with arrangements.
An On Line Guest Book for Jason, or to share a memory, please visit:RJMillerfunerals.net