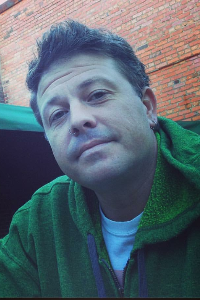 North Carolina: Jasen J. Morin, 42, passed away suddenly and unexpectedly at home on Monday, September 4, 2017. Additional information will be forthcoming.

Jasen Morin, remains the most authentic person I've ever met. Even when his authenticity derailed his train, he remained original and indifferent to the hardships. In fact he would often meet life's challenges with tenacity in what I can only describe as a game of chicken. Jasen stubborn, unrelenting; a show of moxie standing up to icebergs only he had the desire and will to endure. He didn't always win but he always picked himself up.

Jasen grew up in our little estuary in Vermont in a time that helped foster the thespian in him. Everyone who met Jasen would be immediately drawn to his inviting sweet smile and his soulful loving eyes. His eyes looked as though they had seen a million lifetimes. They were so kind and forgiving and his smile made everyone gravitate to him. He was easy and he made you feel easy. I'll always picture him in his tie short sleeve white button up shirt and khaki pants on stage singing Billy Joel his senior year.

Jasen was passionate and funny. He would say the most unmentionable things so casually and in that moment of disbelief and laughter, the two of you would exchange a moment of uncanny joy and companionship because he helped you discover something about yourself.

I don't know exactly what was the author of the pain he suffered from, but it haunted him early and was long lasting. Jasen was a torrent when he was courting addiction. He didn't do anything half way. But we loved him for just that. His loyalty, his willingness to at any minute go with you any place any where. When he had peace with himself there wasn't a more kind human being. Utterly selfless and devoid of any pretense and genuine every minute. Jasen never ever aspired to be anything but himself.

He was always fully present when you were in his company. You could count on Jasen to tell you what he thought and he had an intelligent mind to be a great resource for anyone

During his career in mental health as a social worker, he opted for the most difficult case I've ever known. He handled it with panache and as usual, total heart. I was in awe. He was equally adept in the kitchen where at any time you could show up unannounced and he was only too happy to make you food from his kitchen and be fully present with you. He was a chef by trade, and had just completed a degree in Sustainable Agriculture.

Jasen made a difference in everyone's life that had the good fortune to meet him and that's why it's so hard to think that we won't have access to his authenticity, his acceptance, his unconditional assuring embrace, and his particularly twisted wonderful humor. He was lovely and beautiful.

He embodied the human condition and exemplified so very much. I wanted more time with him. I'm so angry he is gone so early and I can't imagine the void he left for his family and friends.

If there is an afterlife when we pass, I hope Jasen will be right there to meet me when I cross over