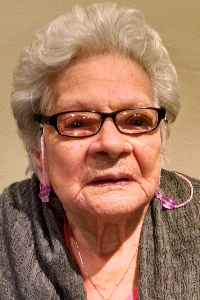 She was the wife of the late Carlos Sarmiento who died in 1991.

Mrs. Sarmiento was born in Zipaquira, Colombia on May 3, 1915, a daughter to the late Laureano and Dorotea (Prieto) Velasquez. She was raised and educated in Colombia and in 1982 she and her husband moved to the United States. She enjoyed listening and dancing to Colombian music and will be forever remembered as a loving and devoted mother and wife. She could often be found singing while doing household chores and was an exceptional cook. When living in Colombia Mrs. Sarmiento not only cooked for her six children, but also made sure to make plenty of food to provide for neighbors and friends who would stop by.

Family and friends will gather to honor and celebrate her life on Thursday, September 7th from 5:00pm until 7:00pm at CALLAHAN, FAY & CASWELL Funeral Home, 61 Myrtle St., Worcester. A Mass of Christian Burial will be celebrated at 10:00am on Friday, September 8th at Our Lady of Providence Parish at St. Bernard's Catholic Church, 226 Lincoln St., Worcester. Burial will follow at St. Johns Cemetery.