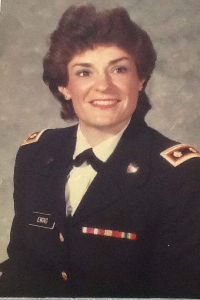 Goffstown, NH: Linda M. Ewing, 69, Lieutenant Colonel, Ret. United States Army, passed away unexpectedly on Wednesday, August 30, 2017. She leaves behind her wife and loving life partner of 28 years, Martha Shelly-Ewing of NH and many beloved cousins, nieces, nephews, and friends. She was pre-deceased by her brother, Alan Ewing.

Linda was born in Worcester, MA, the daughter of the late Raymond and Dorothy (Fulton) Ewing. She graduated from Burncoat High School in Worcester, MA, and earned a Bachelor’s degree in English from Keene State College in Keene, NH, a Master's degree in English from Assumption College in Worcester, MA, and a second Master's degree in Media Communications from Webster University in Webster Groves, MO. A 20-year active duty service member, Linda had the distinction of being the first female professor at the United States Military Academy at West Point. She served proudly in many key roles. In addition to teaching, she served as staff for General Norman Schwarzkopf prior to Desert Storm. She also served as Quartermaster at a military base in Egypt for several years. In addition to her distinguished military career, Linda was a restaurateur and an avid writer, having co-authored several books. She was a diehard Red Sox fan and a world traveler who especially enjoyed the ocean. She collected and appreciated art and was truly at home in nature. Linda had deep compassion for her fellow service members and helping homeless Veterans was especially important to her. Linda was bright, caring, witty, and kind. We will miss her dearly.

A memorial service will be held on Saturday, September 16, 2017 at 10:00 a.m. in the Chapel at Rural Cemetery, 180 Grove St., Worcester, MA. Burial with military honors will follow at the family gravesite in Rural Cemetery. In lieu of flowers, donations in Linda's memory may be made to Liberty House Inc., 75 West Baker St., Manchester, NH 03103. To leave an online condolence message, please click link.