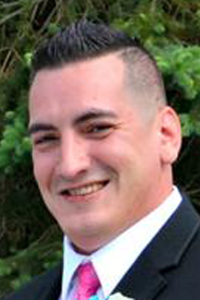 Cori Jae Morris, 32, of Swansea died August 27, 2017 unexpectedly at home after a brave battle with drug addiction.
Born in New Bedford, the son of Brett C. Morris and his wife Alison (Wolcott) Morris of New Bedford and Susan (Dolman) Morris of Dartmouth, he lived in New Bedford most of his life before moving to Fall River and Swansea.
Cori was employed as a plumbers apprentice with Triangle Refrigeration in Fall River.
He was an avid Boston Bruins and Detriot Lions fan. He was a devoted father and was happiest when spending time with his son Cameron. He enjoyed playing pool and was always the life of the party.
His family would like to thank Bob, Justin, Tom and Jess for always being there for Cori in the past and for his family now.
If you or anyone you know is struggling with addiction, don't wait, get help, call NA at 1-800-591-6474.
Survivors include his parents; a son, Cameron Morris and his mother Brandi DeCorso of Fall River; his brother, Curt Morris and companion Maureen Noonan of New Bedford; 2 step-brothers, Anthony and Abishai; a step-sister, Aneshia; his paternal grandmother, Lucinda (Mello) Morris of Dartmouth; his maternal grandmother, Louise (Avila) Knowles of New Bedford; 4 aunts, Cheryl Letendre and her husband Ray, JoAnn Carreiro and her husband Kevin, Elizabeth "Woofa" Dolman and Alice Costa; 4 uncles, Rick Phillips, Robert Phillips, Ronald Freitas and Joey G.; a niece, Olivia; a nephew, Joseph; and several cousins including Jason Mello and his fiancée Lindsay Kaylor.
He was the grandson of the late Milton J. Morris.
His visiting hours will be held on Friday, September 1, 2017 from 2-6 pm with a prayer service at 5 PM in the Saunders-Dwyer Home for Funerals, 495 Park St., New Bedford.