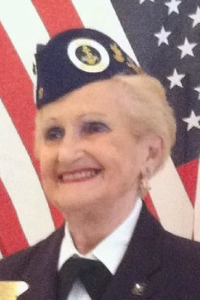 Ethel was born in Rockaway Park, Long Island, New York, daughter of James and Berena (Mullin) Seelig. After graduating from the former Bishop McDonald High School in Brooklyn, NY she attended St Joseph College in Brooklyn before enlisting in the US Navy in December 1943. Married to the love of her life, Jack McGinn she moved to Worcester in 1948 where she made a rich and full life for herself and her family. Always involved, she became active in the American Legion to which she belonged for 67 years an original member of the Worcester All Women’s Post, and later the Main South Post where she was active as the lay chaplain.

She was present at the dedication of the Women in Military Service Memorial in Arlington, VA in 1997, and was a 25 year member of WAVES National, Old Ironsides Chapter, traveling all over the country to rejoin her "shipmates" at yearly conventions.
Ethel worked at Paul Revere Insurance for many years before retiring in 1985. She devoted 30 years of her life to Al Anon where she served in numerous capacities at the state and local level. She volunteered at the Worcester Hospice House for 8 years. Ethel’s participation in Our Lady of the Angels parish was central to her life; a member of the choir for 50 years, serving in the Mother’s Club and Sodality. After moving to New Hampshire in 2001, she characteristically was in the middle of a very active social circle that included quarterly line dancing performances and nightly happy hour in her over 55 community. In her declining past 4 years she has remained bright, cheerful and bringing joy to everyone around her. Ethel was still singing the day before she died.

The Funeral will be held on Wednesday, August 30th from CALLAHAN FAY & CASWELL Funeral Home, 61 Myrtle Street, Worcester with a Mass at 10:00 am at Our Lady of the Angels Church, 1222 Main Street. Burial with Navy Funeral Honors will follow at Worcester County Memorial Park, Paxton. Visiting hours are Tuesday, August 29 from 5:00 until 7:00 pm in the funeral home.

In lieu of flowers, donations may be made to The Women in Military Service for America Memorial, https://www.womensmemorial.org/ Women's Memorial Foundation, Dept. 560, Washington, DC 20042-0560 or Our Ladies of the Angels Building Fund, 1222 Main Street, Worcester, MA 01603.