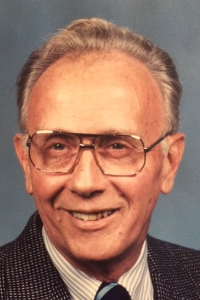 Donald E. Stearns, 89, of Worcester, died August 25th in UMass-Memorial Hospital. His wife, Marilyn J. (Dunton) Stearns died in 1989. He is survived by two sons, Bruce E. Stearns of Worcester and Brian A. Stearns and his wife, Rebekah of Idaho; two daughters, Kristina Turnan and her husband, John of Auburn and Kimberly Rezendes and her husband, John of Attleboro and four grandchildren, Victoria, Elijah, Enoch and Marilyn. He was predeceased by a sister, Martha Dunsmore and a brother, George Stearns.

He was born in Worcester, the son of George and Mary (Emerson) Stearns; and was a graduate of Worcester Boy's Trade School. Donald was an Army veteran serving during the Korean War. He had been employed as a Licensed Pipe Fitter by Wyman-Gordon's Worcester plant for 35 years before retiring. Mr. Stearns was a member of the Aldersgate United Methodist Church and had served on its Board of Trustees. He loved going to the Cape and trips to Vermont to visit his sister and her family.

At the request of his family his funeral and burial will be private. O'CONNOR BROTHERS FUNERAL HOME, 592 Park Avenue is assisting the family with arrangements. Memorial contributions may be made in his name to the Worcester Animal Rescue League, 139 Holden Street, Worcester, MA 01606.