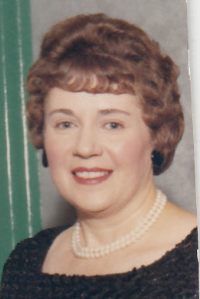 She leaves a granddaughter, Julie Ann St. Laurent and her companion Lance Halloran of Worcester; 2 great-grandchildren, Jessica A. St. Laurent of Dudley and Stefan M. Souza of Worcester; her daughter-in-law, Kathleen M. Blair of Dudley; nieces and nephews. She was preceded in death by her son, Edward C. Blair in 2014, by her grandson Jeffrey E. Blair in 1973, and by her two brothers, Stanley D. Jajko in 1984 and Ted M. Jajko in 1992.

She was born in Easthampton, a daughter of Walter and Bertha (Odoj) Jajko and graduated from Bartlett High School in 1941.

Mrs. Blair was a floor lady at Desco, Sandlerette and Bates Shoe Company before retiring. She was a member of Saint Anthony of Padua Church. She enjoyed dancing and big band music.

The family would like to extend their heartfelt gratitude to the staff at Webster Manor for the kind and compassionate care they provided Stasia during her stay at the Manor.

The funeral will be held Saturday, August 19, from the Sitkowski & Malboeuf Funeral Home, 340 School Street, Webster, with a Mass at 10:00 AM in Saint Anthony of Padua Church, 24 Dudley Hill Road, Dudley. Burial will be in Saint Joseph Garden of Peace, Webster. Visitation will be from 8:30 to 9:15 AM Saturday in the funeral home. Donations in her name may be made to Webster Manor Patient Activities Fund, 745 School St., Webster, MA 01570.