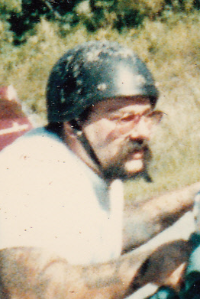 He leaves his wife of 9 years and friend of over 20 years, Jennifer M. (Brace) Caplette; a step-daughter, Kaylah Brace; a brother, Robert C. Caplette, Jr; a sister, Robin Joppas and her husband Karl, all of Webster; nephews, nieces, many friends and “brothers”. He was preceded in death his brother Richard and by his sister Tammy.

He was born in Webster, the son of the late Robert C. Caplette, Sr. and Rita A. (Pronto) Caplette and lived here all his life.

He was a construction worker for his brother Richard ‘s trucking company for several years.

Mr. Caplette was a very giving and caring person. He was also an avid biker and artist.

A memorial Mass will be held at 11:00 AM on August 15th in Saint Roch’s Church, 334 Main Street, Oxford. There are no calling hours. Donations in his name may be made to the Great Dane Service Dog Project, Inc., 37 Boxford Road, Ipswich, MA 01938, www.servicedogproject.org. Arrangements are under the direction of Scanlon Funeral Service, 38 East Main Street, Webster.