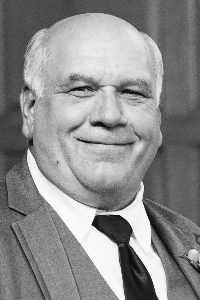 
WEST BOYLSTON- Steven C. Osterberg, Retired Deputy Chief of the West Boylston Fire Department, passed away surrounded by those he loved on August 5, 2017 at UMass Medical Center. He was 65.

Steven was born in Worcester on May 6, 1952 a son of the late Bertil and Dorothy (Friberg) Osterberg. He was raised in West Boylston and graduated from West Boylston High School in 1970. He went on to earn an Associate’s degree in Electronics from Quinsigamond Community College. From there, he began working at the school in their Electronics Department. On May 1st 1968, Steven joined the West Boylston Fire Dept as a recruit firefighter. On June 3rd 1973, Steven was appointed to the fire department as a regular firefighter/EMT and in 1996 was appointed Deputy Chief. Steven courageously continued to serve the town for the next 49 years, retiring on May 6th 2017. Steven also worked many years for Digital Corporation as a field service tech. He started his career with Digital on January 2,1974. He continued to work for Digital for many years. Later, he worked for Village Power in Berlin, MA and eventually began operating his own shop, P & S Power and Service in West Boylston. After closing his shop, Steven started working for the Town of Boylston DPW. He worked there for 20 years, retiring on May 6th 2017. While working for the Boylston DPW, Steve would also respond to fire and EMS calls for the Boylston Fire Dept.


Steven was a member of Norco Sportsman’s Club in Princeton, West Boylston Fire Association, and Mass Call Fire Association. Steven enjoyed fixing small engines, gardening, ice fishing, and model trains. He also enjoyed flying model airplanes and target shooting. He and his wife were members of the Clinton Turners Bowling League where he enjoyed bowling. He was a selfless, strong, and giant-hearted man who will be deeply missed by all who were privileged to know him.