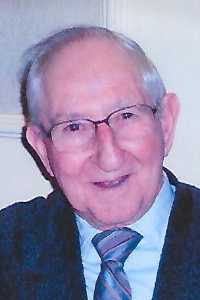 
Boylston- Raymond F. Shankle, Jr., 90, passed away peacefully on Saturday, August 5, 2017, at home surrounded by his loving family. He leaves his wife of 66 years, Esther (Lego) Shankle; 2 daughters - Cindy Sears and her husband Steve of Boylston and Donna Belinsky and her husband Bruce of Norton; a daughter-in-law - June Shankle of Maine; 8 grandchildren - Jeff Sears of Boylston, Tim Sears and his wife Ann Marie of North Carolina, Shannon Grounds and her husband Ben of North Carolina, Tammany Shankle of Indiana, Chris Shankle and his partner Leah of Maine, Brandon Shankle of Quincy, and Ben and Alex Belinsky of Norton; 6 great-grandchildren Ella Kate, Aiden, Jackson, Lucas, Jacob, and Daniel; and nephews Rob and Bruce Nichols. He was pre-deceased by his son, Ken Shankle, 2 sisters - Marian Sanders and Vera Nichols, and a great-granddaughter - Schuyler.

Ray was born in Worcester, son of the late Raymond and June (Corkum) Shankle. He attended Worcester Boys Trade High School and worked for many years as a custodian in the Boylston Public Schools. He was a longtime member of First Congregational Church of Boylston, was a well known and respected baseball player in the Worcester area during the 1940s and 1950s, and enjoyed spending time with his family, and could always be found supporting his children and grandchildren in all of their activities over the years.

Visitation Open House will be held on Sunday, August 20, 2017 from 2-4 p.m. at the Boylston Town House. Burial was private. In lieu of flowers, donations in Ray's memory may be made to the Boylston Ambulance Association P.O. Box 634 Boylston, MA 01505. To leave an online condolence message, please click link.