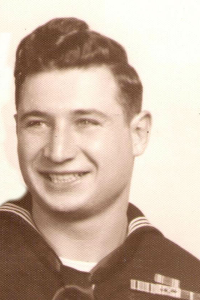 
Edo Verdini, 92, passed away Tuesday, July 25, 2017 at Beaumont of Northbridge, surrounded by his family.

He met his beloved wife, Clare E. (Creegan) Verdini while roller skating at Mechanics Hall, they were married in 1948 and began their family. Sadly Clare passed away in 1991. He is survived by three sons; Paul Verdini and his wife Eilyana of Holden, James Verdini and his wife Sheila of Worcester, Dr. John Verdini and his wife Helena of Castletown, NY and a daughter, Christine Verdini of Sutton. Edo is also survived by his brother, Albert Verdini of Worcester; 11 grandchildren, Paul, Mark, Gregory, James, Shawn, Danny, Julie, Stephen, Kathleen, Kristina and Briana and many great grandchildren. A son, Michael Verdini died in 2015.

He was born in Worcester, son of Italian immigrants Guerino and Ida (Pascucci) Verdini. Edo moved to Fenille, Italy with his parents and brother when he was 2 years old. Edo’s mother died within a year of Scarlet Fever. Guerino returned to America to work and raise money to bring his sons home. Edo returned to the United States at age of 11. He was drafted into the US Navy, during WWII at the age of 19 and served in the Pacific Theatre aboard the Destroyer Ingersoll, receiving 9 battle stars over 27 months. He was employed at Worcester State Hospital as an LPN for over 30 years, retiring in 1982. He enjoyed traveling back to Italy to visit family on numerous occasions. Edo was a faithful Red Sox and Patroits fan and a former longtime communicant of St. Stephen’s Church.

The funeral will be held on Saturday, July 29 from Callahan Fay & Caswell Funeral Home, 61 Myrtle Street with a Mass at 10:00 am at St. Stephen’s Church, 357 Grafton Street. Burial will be in St. John’s Cemetery. Visiting Hours will be held on Friday, July 28 from 4 until 7pm at the funeral home. In lieu of flowers, donations may be made to Project New Hope, 70 James Street, Worcester, 01603.