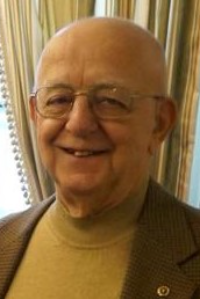 Jean Albert Grenier, 86, of Worcester, died Friday, July 21, 2017 in UMass Memorial Hospital, 119 Belmont St., surrounded by his loving and devoted family. He is dancing together again with his wife Gloria L. (Abbondanza) Grenier, who passed away in 2012. He is survived by his children; David Grenier and his wife Susan of Oxford, Christopher Grenier and his wife Diane of Webster and Giselle Grenier of South Natick; grandchildren, Lauren, Bryan, Matthew, Christopher Jr., Gina Marie and Victoria; great-grandchildren, Lukas, Chatham and Logan; sister Claire Nelan and her husband Joseph of Maryland; nieces and nephews. He is predeceased by his son Philip S. Grenier. Jean was born in Worcester a son of Tilman and Rose Blanche (Plaisance) Grenier.
Mr. Grenier was a proud tool and dye maker who retired as a Manufacturing Manager from Fenwal Manufacturing, Inc. He previously worked for Harrington Richardson Company and worked on the original space program at the David Clark Company. He served in the Massachusetts Air National Guard retiring as Master Sergeant. He graduated from St. John High School and Clark University. He was a member of St. John Church. Previously a member of St. Joseph Church, he was an active Eucharistic minister, Instructor of the Rite of Christian Initiation of Adults (RCIA) program, lecturer and alter server. He was a member and advocate for Society of St. Vincent de Paul. Jean was an avid reader and historian, enjoyed the challenge of puzzles, and whose garden was admired by all that passed his home. Traveling with his wife and enjoying his family was a source of pleasure for him.
Memorial calling hours will be Sunday, July 30, 2017 from 5:00 to 7:00 PM in DIRSA-MORIN FUNERAL HOME, 298 Grafton St. followed by a Memorial Service in the funeral home. Burial in Notre Dame Cemetery will be private. In lieu of flowers, memorial contributions may be made to St. John Food for the Poor, 44 Temple St., Worcester, MA 01604 or Society of St. Vincent de Paul, National Council of the United States, 58 Progress Parkway, Maryland Heights, MO 63043-3706. www. worcesterfuneral.com