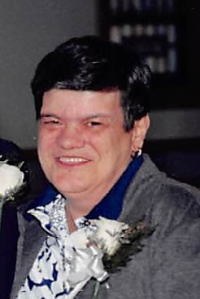 Worcester – Barbara S. (McGee) Nicholas, 66, of Spencer, died on Friday, July 21 in Wingate at Worcester after a long illness.
Barbara is survived by her husband, Wilfred J. Nicholas; 3 sons, James Nicholas and his wife Christina of Worcester, Robert Nicholas of Worcester and Carl Nicholas and his wife, Kelly of Bourne, MA; a daughter, Tina Friss and her husband, Matt of New York; 2 brothers, Carl McGee of Florida and Gary McGee of Spencer; a sister, Cindy Cooper of Maine; 9 grandchildren, 4 great grandchildren and many nephews and nieces.
Mrs. Nicholas was born in Worcester, daughter of the late Carl and Maude McGee and is also predeceased by a brother, Paul and two sisters, Carol and Ann.
Barbara worked for many years in the housekeeping department of various hotels. She was an avid sewer and enjoyed playing bingo and crocheting but she was happiest when she was socializing with friends and spending time with her family, especially her grandchildren.
Private funeral services are being held with burial in Worcester County Memorial Park, Paxton. Memorial contributions in memory of Barbara may be made to Why Me c/o Sherry’s House 1152 Pleasant Street Worcester, MA 01602.
To share a memory or to sign the online guestbook, please visit www.Royfuneral.com