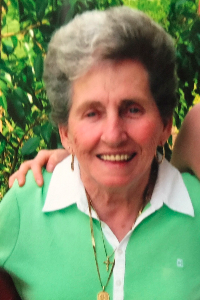 WORCESTER- Elizabeth L. (Kane) Johnson, 84, passed away peacefully on July 18, 2017 at her home surrounded by her four loving children.

Mrs. Johnson was born in Burlington, Vermont a daughter to the late Walter and Beatrice (Graham) Kane and attended local schools through High School.

She was the Activities Director at the former Mill Hill Nursing Home for over 20 years, she had a strong faith and enjoyed being with family and friends throughout life’s joyous occasions.

Mrs. Johnson is survived by her children, Kenneth R. Johnson Jr. and his wife Sandy of Worcester, Steven M. Johnson and his wife, Linda of Auburn, Dawn M. Lotsbom and her husband Robert of Sutton and Kevin E. Johnson and his wife, Cassandra of Paxton; her grandchildren, Sara Reid of Auburn, Justin Lotsbom of California, Fred Lotsbom of California, Amanda Salmon of Worcester, Stefanie Silva of Worcester and Corey, Connor, Brianne and Shannon Johnson, all of Auburn; her great grandchildren, Lucy and Sophia Reid and Lennox and Ellis Salmon; many Nieces, nephews and extended family members.

Besides her parents, she is predeceased by a son, John Johnson who passed away in 1964; her siblings, Walter, Robert “Bobby” and John Kane, Margaret Meunior and Anne Hassett.

Funeral services will be held privately and are in the care of CALLAHAN, FAY & CASWELL Funeral Home, 61 Myrtle St., Worcester. Memorial donations may be made in her memory to the Christopher Height’s Resident’s Activity Fund, 20 Mary Scano Drive, Worcester, MA 01605.