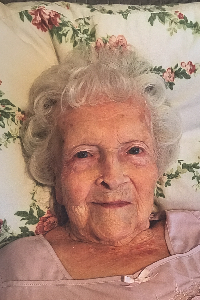 Arizona: Mildred T. (Kelley) Depanian passed away peacefully on Friday, July 14, 2017 at home with her daughters. She leaves three sons- David and his wife Sandra of Worcester, Michael and his wife Linda of Paxton, and Henry Depanian, Jr. of Worcester; two daughters- Claire Winer and her husband David of North Carolina and Debra McClellan of Arizona; 12 grandchildren; 11 great-grandchildren; as well as numerous nieces, nephews, and extended family. She was predeceased by her husband, Henry N. Depanian, Sr. in 1997, her son Edward P. Depanian earlier this year, as well as her five sisters and two brothers.

Millie was born in Worcester, daughter of the late Edward T. and Agnes (Peterson) Kelley. She grew up on Vernon Hill and graduated from Commerce High School and went on to supervise linen operations at St Vincent Hospital. She enjoyed swimming at Coes Pond and loved softball. She was a talented shortstop and likewise was her sister Kay at second base. Her all-women team occasionally played exhibition games against the Holy Cross mens faculty team (“...and we did not use gloves"). During WWII, she answered the call and proudly served her country in the United States Coast Guard Women’s Reserve-SPARS. After basic training at the Coast Guard “ship” Biltmore in Palm Beach, FL, she was assigned to the 1st Coast Guard District personnel office in Boston where she processed payroll allotments for the busy merchant marine activity there. After the war, Millie served on the committees for the first two annual Boston SPAR reunions and met the newly elected Congressman and guest speaker Hon. John Kennedy. She graduated from the Worcester School of Business Science and became a legal secretary at the law office of attorney and politician Joseph A. Aspero of Worcester. After her marriage in 1947 and raising her six children over the next three decades, Millie and Henry retired in Arizona. They enjoyed their friends, music and countless hours together criss-crossing the nation by automobile to visit and explore, going to Bingo and playing Yahtzee. Following the passing of her husband and until her recent death, Millie enjoyed her life and the love, companionship, home and care from her devoted daughters.
Calling hours will be held on Friday, July 21st between 5:30-7:30 PM in Nordgren Funeral Home 300 Lincoln St. Worcester. A funeral service at the funeral home will be held on Saturday, July 22nd, 10:00 AM, followed by burial in Worcester County Memorial Park, 217 Richards Avenue, Paxton. Following the funeral service, there will be a gathering with refreshments at the First Presbyterian Church, 125 Holden St, Worcester, MA 01606. For directions to the funeral home or to leave an online condolence message, please click link.