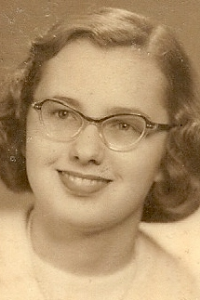 She was born in Worcester, the daughter of Francis and Mary (Lyon) Hobbs, and later graduated from David Prouty High School in Spencer, Bates College in Lewiston, ME., and New England Baptist School of Nursing in Boston.

Jean was a longtime Registered Nurse for the Spencer Visiting Nurse Association. She was a member of the Grand Executive Board of the International Order of Rainbow for Girls, was a longtime Mother Advisor to Spencer Assembly #72, and a lifelong member of the First Congregational Church. A few of her many loves included nature (especially birds), her family, and spending time on Cape Cod with her husband.
She leaves her devoted husband of 61 years Robert E. Vandale,
her sons: Mark R. Vandale and his wife Laurie of E. Brookfield, Jeffrey H. Vandale of Aurora, Colorado, her daughter: Lisa Ann Lynch and her husband Andrew of E. Brookfield,
her 6 grandchildren: Susan, Robert, Stephen, Christopher, Jeffrey and Alyda and
3 great grandchildren: Elizabeth, Kane and Kable.

A memorial service will be held on Tuesday, July 18 at 11 a.m. at the First Congregational Church of Spencer 205 Main St., Spencer, MA.

Burial will be at the convenience of the family in Pine Grove Cemetery.

In lieu of flowers, contributions may be made to either the First Congregational Church Memorial Fund P.O. Box 187, Spencer, MA. 01562 or Rose Monahan Hospice Home 10 Judith Rd., Worcester, MA 01602.