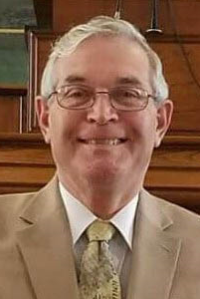 He leaves his wife of almost 49 years, Claudette M. (Thibodeau) Harmon; 2 sons, Christopher T. Harmon and his wife Tracey of Woodstock, CT and Shawn J. Harmon and his wife Melissa of Putnam, CT; a daughter, Stacie (Harmon) Auvil and her husband Jeromy of Middletown, OH; his mother, Cecile (Cyr) Harmon of Hermon, ME; 2 sisters, Katherine Martin and her husband Michael of Hermon, ME and Denise Stiewig and her husband Jeff of San Antonio, TX; grandchildren, Alyssa, Matthew, Brevon, Kayla and Austin Harmon, Faith and Jacob Auvil, Hunter and Devin Foisy and Ty Morgan; nephews and nieces. He was preceded in death by his father, Byron Harmon, his brother, Arthur Harmon and his granddaughter, Haley Harmon.

He was born on July 11, 1946 in Caribou, ME and graduated from Caribou High School in 1964. He later completed pastoral studies at Liberty Baptist College in Lynchburg, VA from 1976 to 1979.

He was a Navy veteran of the Vietnam War.

He enjoyed mountain climbing, hunting and fishing with his children and grandchildren and being with his family. He was a lifelong member of the NRA. He was dedicated to his church and ministry.

Visitation will be from 6:00 to 8:00 PM Friday, July 14, in the First Baptist Church, 33 East Main Street, Webster, concluding with a prayer service at 7:45 PM. The funeral will be held Saturday, July 15, at 11:00 AM in the church. Burial will be Monday, July 17, at 11:00 AM in the Maine Veterans’ Memorial Cemetery, 37 Lombard Road, Caribou, ME. Instead of flowers, donations in his name may be made to either the First Baptist Church, c/o the Harmon Family to assist in medical expenses, or to the church itself, 33 East Main St., Webster, MA 01570. Arrangements are under the direction of Scanlon Funeral Service, 38 East Main Street, Webster, MA.