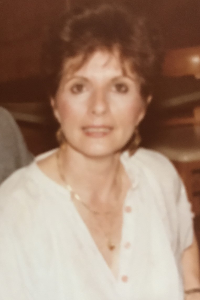 Worcester-Virginia M. Herideen Spear of Metcalf Street passed away on Wednesday, July 5, 2017 surrounded by her four loving children. Born in Oxford, MA her family moved to Malden, MA where she was raised, to then return to Oxford for her high school years. Just as she was nurtured by the love of an extended family growing up, Virginia dedicated herself to her loved ones.

Virginia's beloved husband, Richard M. Herideen, died in 1999. She leaves her four children, Pamela Fowler of Lexington, MA and her son, Evan; Dr. Penelope Herideen of Worcester, MA and her children, Karl and Watts; Justin Herideen and his wife, Ann of Akron, OH and their children, Kelsey, Blake and Nicholas; and Melissa Horsmann and her husband, Dr. Ulrich Horsmann of Cologne, Germany and their children Ella and Hudson. Virginia's second husband, Dr. Ivan M. Spear passed away in 2014. She leaves a multitude of endearing friends, most especially Myrtle and Roger Bacon of Oxford, MA.

Virginia's four children and eight grandchildren were the centerpiece of her life. She instilled in them a love of learning and the pursuit of personal growth, taking particular pride in their many achievements. Sports events, recitals, play productions, musicals and graduations, Mum or Grammie, as she was called, was always in attendance with her supportive smile. Her family benefited from her quick witticisms that imparted humor, wisdom and direction. Virginia was a dedicated wife throughout her years of marriage, especially caring for her ailing husband Richard prior to his death and her second husband Ivan during his last years of ill health. She imparted strength and courage to the ones around her.

More city than country, more international than national, Virginia traveled the world. She had a genuine curiosity, a special sense of wonder and an adventurous spirit. At one point in time, she visited together with her husband, Richard, each of their children who were spread across four continents. Later in life, she even took an excursion to China alone. From the Pyramids of Egypt to Russia, Germany, Israel, Poland, Hungary, Italy, Brazil, Korea, and to the Denali National Park in Alaska to mention some, she explored and experienced the world admiring both its natural and human made beauty.

Virginia was an attractive woman with a natural sense of style. Her homes had unique treasures of her travels as well as fine antiques and works of art. She enjoyed aerobics and strength training classes and reading autobiographical novels. Politics and finance were her keen areas of interest. Most importantly, as a woman of faith, the Lord and prayer guided her. She met each day with optimism and hope.

We will miss her dearly.

Funeral arrangements are being made by Callahan, Fay & Caswell Funeral Home, 61 Myrtle Street in Worcester, MA. Visiting hours will be held on Friday, July 14 from 5-7 PM. A funeral mass will be held on Saturday, July 15 at 11 AM by Father Michael Roy at Immaculate Conception Church at 353 Grove Street, Worcester, followed immediately by a reception at Tatnuck Country Club in Worcester.

The family accepts flowers and/or donations made to University of Massachusetts Memorial Foundation at www.umassmed.edu/give (kindly choose “other” from the drop down field “I wish to donate to” and in the box below type “in memory of Virginia Herideen Spear”.) Alternatively, donations can be mailed to the Office of Advancement, UMass Memorial Health Care, 333 South Street, Shrewsbury, MA 01545. Checks should be made out to UMMF – in memory of Virgina Herideen Spear.