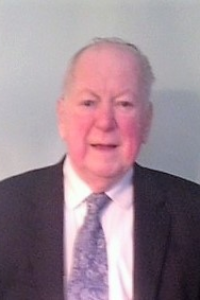 
Boylston- Joseph H. Larkin, 78, passed away on Thursday, July 6, 2017 in St. Vincent Hospital in Worcester. He leaves his wife of almost 49 years, Elizabeth "Betty" (Keulian) Larkin; a daughter- Debra "Deb" Larkin; a son Scott J. Larkin and his girlfriend Jess Finn; a sister- Margaret Larkin of Worcester; a brother- Thomas Larkin of TN; a brother in law and sister in law, many nieces, nephews and his beloved dog Zoe. He was pre-deceased by two brothers Michael and John Larkin and two sisters- Marion Caplette and Katherine Armendo.

Joe was born in Worcester, son of the late Michael and Marion (Keniry) Larkin. He graduated from Commerce High School and earned his Associates Degree from New England School of Accounting. He worked for many years as an accountant for Rand Whitney Container Corp. in Worcester. He proudly served his country in the U.S. Air Force and was a member of the American Legion Post # 398 in Boylston for over 40 years, serving as commander for the last 24 years. He organized and ran Boylston's Memorial Day Parade for many years, was a member of First Congregational Church in Boylston, and past president of The Boylston Senior Citizens group. He was also a member and assoc. Projects Treasurer of the Greendale Retired Men's Club and its bowling league.

Calling hours will be held on Monday, July 10, 2017 from 5-8 p.m. in Nordgren Funeral Home 300 Lincoln St. Worcester. A funeral service will be held on Tuesday, July 11, 2017 at 11:00 a.m. in First Congregational Church of Boylston. Burial will follow in Pine Grove Cemetery, Boylston. In lieu of flowers, donations may be made in Joseph's memory to the church, the Boylston Ambulance Fund, or the Boylston Memorial Day Parade Fund.