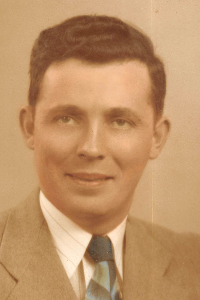 John Doyle, 92, of Leicester, died Sunday, July 2nd at the St. Francis Rehabilitation and Nursing Center, in Worcester. His wife of 52 years, Bridget (Scanlon) Doyle, died in 2009. He leaves behind two sons, John M. Doyle and his wife, Maureen of Leicester and their children, Daniel, Catherine, and Michael; James M. Doyle and his wife, Jacqueline of Sudbury and their children, Bridget, Caroline, and Thomas; two daughters, Anne M. Doyle of Waltham, and Mary T. Doyle of Worcester; and many nieces and nephews in Ireland and England. The youngest of his family, John was predeceased by four brothers and three sisters.
John was born in Sneem, County Kerry, Ireland. The son of Michael and Annie (Alsworth) Doyle, he immigrated to the United States in 1948. John was a veteran of the United States Army. He worked at Wilson Foods as the Meat Department Manager, retiring in 1981. John was an active member of St. Peter’s Church and a former member of its Men’s Club and the Knights of Columbus.
Though John was far from his birthplace, he never lost his Irish charm, and Ireland was always close to his heart. He was a devoted husband, and beloved father and grandfather. John enjoyed cooking for his family and was an avid gardener. He took great pride in the lovely flower beds and vegetable gardens that surround his home. John was the center of all family gatherings and will be greatly missed.
His funeral is Friday, July 7th with a Mass at 11:00 AM in St. Peter’s Church, 931 Main Street, Worcester. Burial will follow in Worcester County Memorial Park, Paxton. There are no calling hours. In lieu of flowers memorial contributions may be made to St. Peter’s Church, 929 Main Street, Worcester 01610 or to Meals on Wheels, c/o Elder Services of Worcester Area, Inc., 67 Millbrook Street, #100, Worcester, MA 01606. O’CONNOR BROTHERS FUNERAL HOME, 592 Park Avenue, Worcester is directing arrangements.