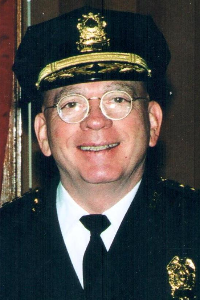 WORCESTER-Carlo J. Genatossio, Sr. 75, retired Deputy Police Chief of the City of Worcester passed away on Thursday, June 29 in the Rose Monahan Hospice House, surrounded by his family.

Carlo leaves his wife of 49 years, Frances M. (Casale) Genatossio; a son, Carlo J. Genatossio, Jr. of Oxford; two daughters, Melissa E. Ela and her husband, Robert of Spencer and Gina M. Genatossio-Lauder and her husband, Joel of Leicester; eight grandchildren, Nicholas, Lindsey, Maeve, Nina, Tighe, Rocco, Robert and Austin; a brother, Domenic Genatossio, Jr. of Holden; a sister, Caroline Carenzo of Holden and nieces and nephews. He was born in Worcester, son of Domenic and Mary (Coughlin) Genatossio and graduated from North High School and Quinsigamond Community College with a Degree in Criminal Justice. He served in the U.S. Army during the Vietnam War.
Carlo began working for the City of Worcester Police Department on Waldo Street as a Patrolman in November of 1967. He was promoted to Sergeant in 1975, then to Lieutenant in 1982 and Captain in 1985. Carlo was appointed Deputy Chief in September of 1990 and retired in 2004, after serving the City of Worcester for 38 years. Carlo and Frances enjoyed ten years of retirement living in Naples, Florida, before recently moving back to Worcester.
Carlo was a member of and past president of the Patrolman’s Union #378, a 32 Degree member of the Matthew John Whittall Lodge of Masons A.F. and A.M, and a lifelong member of Our Lady of Mount Carmel Church. Carlo loved summer days at Cape Cod, his boat on Lake Winnipesaukee, vacations to Italy, Bahamas and Hawaii with Fran and family celebrations in a North End. He will be remembered for his remarkable intelligence, strength of character and a loving protector of his family.

The family would like to extend a special sincere thanks to the staff at Rose Monahan Hospice House for their care and compassion.

A Funeral will be held Thursday, July 6, from CALLAHAN~FAY~CASWELL Funeral Home, 61 Myrtle Street with a Mass at 10:00AM in Our Lady of Loreto Church, 37 Massasoit Rd. Burial will be in Saint John’s Cemetery. Visiting Hours are Wednesday, July 5 from 4 to 8PM at the funeral home. In lieu of flowers memorial donations may be made to the Rose Monahan Hospice House care of the VNA Network, 120 Thomas St., Worcester, 01608