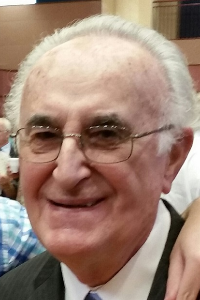 Polizois "Paul" Economou, 88 of Worcester, son of Constantine and Olga (Panagiotou) Economou, died peacefully and surrounded by his family on Sunday, June 25th, 2017 at Holy Trinity Nursing & Rehabilitation Center after a six month battle with pancreatic cancer. Although he was 88, Polizois had the appearance and energy of a 65 year old. Sadly the stealthy nature of pancreatic cancer quickly overcame him in mid-January even though he could shovel snow just two days earlier.
Polizois leaves behind his wife Helen, two sons John and Philip , their wives Luisa and Pamela, three grandchildren (Katerina, Philip and Julian), a niece (Elly Athanasiou), a nephew (Dino Economos) along with their children (Maria, Billy, Eleni and Christopher), and various other relatives and friends including Matthew, Dhimo , and Pano Panagiotou, Athanasia, Theodore and Dino Lyberopoulos. He was preceded in death by his brother Vasilios in 2006.
Polizois was born in the Greek village of Douviani in Northern Epiros. During World War II, as a young teen, he escaped an oppressive and dangerous communist government, along with his mother and other relatives, trekking over the Albanian mountain border into Greece. A few years later he and his mother Olga emigrated to the United States to join his father. His brother Vasilios reunited with them after his service in Greek Army.
Polizios attended Commerce High and Worcester Academy in Worcester and also received a technical education in electronics. His early work experience included positions at the YMCA, Table Talk Pies, and for many years at Western Electric Company. Polizois volunteered for service in the United States Army during the Korean War. He served in the 2nd Armored Division known as “Hell on Wheels.” He was a proud United States veteran and spoke often of his time stationed in Europe.
Polizois, his brother, and cousin Pano were co-owners of the Howard Johnson’s Restaurant in West Boylston, MA. Paul loved serving, mingling with, and befriending his customers. To this day former customers and employees still remark on what a consistently welcoming, fatherly host and caring employer Paul was. He was a patient, warm, optimistic man who hardly ever angered or stressed. Paul adored his family. He was a devoted husband and loving father who did all that he could to inspire and support his two sons.
During his retirement Polizois spent time being a marvelous Pappou (Grandfather) to his grandchildren. He also helped his son John and John’s wife with their various businesses.
Polizois was an active member of Saint Spyridon Greek Orthodox Cathedral, Enosis Epirotic Society of Worcester, and AHEPA (American Hellenic Educational Progressive Association).
We will remember him for his outgoing and compassionate personality, and the innumerable great stories that he shared from history and his youth. May his memory be eternal.
The family thanks the caregivers at Holy Trinity Nursing for their compassion as well as Paul’s loyal friend Matthew Panagiotou for his unwavering support.
Calling hours are Wednesday, June 28th in O'CONNOR BROTHERS FUNERAL HOME, 592 Park Avenue, Worcester, from 5:00 p.m. until 8:00 p.m. The funeral will be held at Saint Spyridon Greek Orthodox Cathedral, 102 Russell Street, Worcester, MA 11:00 a.m. on Thursday, June 29th. Burial will follow at Hope Cemetery. In lieu of flowers, contributions may be made to Holy Trinity Nursing and Rehabilitation Center 300 Barber Ave, Worcester, MA 01606.
Content is coming soon...
O'Connor Brothers Funeral Home
592 Park Avenue
Worcester, MA 01603
508-754-2431
http://www.oconnorbrothers.com