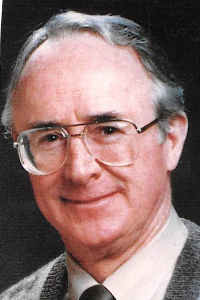 Don was born in Wellesley, MA on Sept 27, 1927 to Margaret Mary (Kingelty) and Edward M. Traub, and grew up in Needham, MA and Tuckahoe, NY. He graduated from Eastchester High School, NY (1944) and enlisted in the Navy. He received his A.B. Degree (1956) in Philosophy from Iona College, and his M.A. (1962), concentration in Philosophy of Science, from St. John’s University, N.Y. He received an A.M. (1967), and a Ph.D. (1973) in Philosophy was conferred by Boston College. After teaching at Iona College, The College of the Holy Cross, and Anna Maria College, he became a member of the Worcester State College faculty in 1969, where he served as Chairman of the Philosophy Department for 10 years, and briefly as Dean of Undergraduate Studies. Don’s book, “Toward a Fraternal Society,” is referenced in colleges and universities, internationally.

Don was a Navy Veteran and “Tin Can Sailor”, where he was a Fire Control Specialist (on 40 mm and 5 inch guns) during World War II, on the Destroyers USS Quick and USS Stickell. He was also a Cold War Veteran and recognized as an “Atomic Veteran” for his participation in nuclear testing in the South Pacific. He was a true Patriot, was proud to have served our great country, and enjoyed attending Naval reunions with his wife.

Don deeply loved his wife and they enjoyed traveling in their retirement until Joan’s death in 2005. In 2008, Don moved to Tucson, AZ, to live with his daughter, son-in-law, and three grandchildren. He was instantly embraced by Tucson, made many close friends, and positively impacted so many lives. Don had a natural magnetism, big smile, wit, intelligence and charm, that made him loved literally by all who met him. A great listener, wise conversationalist, and compassionate soul, he leaves lasting memories with the many friends he has made throughout his life, and a legacy for his children and grandchildren.

Relatives and friends may visit with Dr. Traub's family on Wednesday, June 28th from 5:00 until 7:00 P.M. in O'CONNOR BROTHERS FUNERAL HOME, 592 Park Avenue, Worcester. He will be laid to rest on Thursday, June 29th with a traditional Latin rite committal service at 11:00 A.M. in St. Mary's Cemetery, Holden.