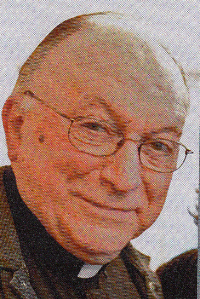 He leaves his fellow Assumptionist fathers and brothers; a sister, Louise M. Mercier and her husband Robert of Leominster; a niece, Amy Dawson of Portland, CT; 2 great-nephews, Nicholas and Alexander; and many cousins. He was preceded in death by his sister, Anne Mastrandrea in 2002, and by a niece, Susan E. Mercier in 2015.

He was born and raised in Leominster, the son of Lucien E. and Gladys L. (Ayotte) Grenache. A graduate of Assumption Prep in 1955 and Assumption College in 1959, he earned his theological degrees from the Universite Catholique de Lyon in France. He was ordained on May 28, 1966 in Sherbrooke, Quebec.

Fr. Grenache served in various educational and pastoral ministries in Quebec, New York City and Mexico. From 1989 to 1996, he was the College’s first director of multi-cultural education and then became the Vice-President of Religious Affairs and Director of Campus Ministry. From 2000-2011 he served as both the Director of Spiritual Life and Chaplain at Bentley University, Waltham.

Funeral arrangements for Fr. Grenache are as follows. On Thursday evening, June 22, there will be a wake service from 5:00 to 7:00 PM at the Assumptionist Center, 330 Market St. Brighton. On Friday, June 23 at 9:00 AM there will be a wake in the Chapel of the Holy Spirit, 500 Salisbury Street, Worcester, followed by a concelebrated Mass at 10:00 AM. Burial will be in St. Anne’s Cemetery, Sturbridge. Donations in his name may be made to the Assumptionist Vocation Fund, 330 Market St., Brighton, MA 02135. Arrangements are under the direction of Sitkowski & Malboeuf Funeral Home, 340 School St., Webster.