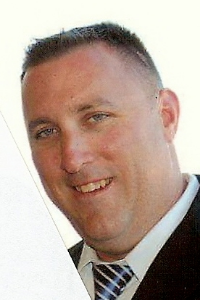 LEICESTER; Todd M. Gully, 39, passed away peacefully, on Friday, June 16, in the Hospital of the University of Pennsylvania Medical Center in Philadelphia after an illness. Born and raised in Sterling, Todd was the son of the Late Paul H. Gully, JR; and Judith (Berry) Gully and lived in the Cherry Valley section of Leicester for 11 years.
He leaves his wife of 11 years, Amber L. (Hedlund) Gully, two sons; Gage Smith and Ty Gully, a daughter, Gia Gully all of Leicester; brother, Brian J. Gully and his wife, Madeleine of San Francisco, CA.; mother-in-law, Gail Laboissiere and her husband, Don of Leicester, and sister-in-law Autumn Connor and her husband Dan and two nieces, and his many loyal and loving friends.
Todd graduated from Wachusett Regional High School where he was a member of the Varsity Soccer Team and Varsity Baseball Team. He also played premier club soccer which afforded him the opportunity to play in England. He was a Member of the Wachusett Junior Race Team at Wachusett Mountain for 7 years and qualified for the USSA Rolex Junior Olympics in 1994. He went onto race at Waterville Valley in their ski program. In college, he continued playing soccer and was a member of the ski team at Colby Sawyer College in New London, New Hampshire. His ski team qualified for the Nationals 3 years in a row. He graduated from Colby Sawyer College in 2000 with a Bachelor Degree of Science in Sports Management.
His two greatest passions were skiing and New England sports teams. Skiing afforded him the opportunity to meet people and see the world. This included traveling around the United States and Europe. After College he coached at Mt Sunapee in New Hampshire. He also loved the Patriots, Bruins and the Red Soxs.
Todd joined the Family Business, and became owner and operations manager of Quality Chairvan Service, after college. As fate would have it, is how he met the love of his life, Amber. They married in May of 2006.
Todd was a people person; he was outgoing, caring, empathetic and loving. He would strike up a conversation with anyone who would listen to him. His smile was infectious above all he loved a good joke. He was a loyal friend who could always be depend on. He loved his family and took pride in his wife and children’s accomplishments. Courageous determined always strong! He was a fighter who never gave up and it carried him a long way over the past 4 years. He may be gone but never will be forgotten.
Relatives and friends are invited to visit with Todd’s family from 4:00 to 8:00 pm on Friday, June 23 at MORIN FUNERAL HOME, 1131 Main Street, Leicester. A Mass of Christian Burial will be celebrated at 11 am on Saturday, June 24, at St. Pius X Church, 1153 Main Street, Leicester. Burial will be private and at the convenience of the family. In lieu of flowers memorial donations may be made to: GULLY CHILDREN’S FUND, C/O TD BANK, 178 Main Street, Sturbridge, MA 01566.