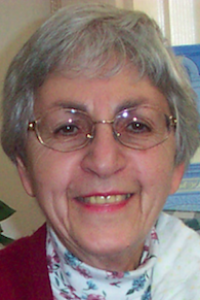 She was born in Worcester on September 16, 1932, daughter of Arthur E. and Isabel M. (Calusdian) Jorjorian. Diana attended local schools and graduated from North High School in 1950. She went on to attend Radcliffe College where she graduated in 1954. From there, she earned her Masters of Library Science from Simmons College in 1957.

Mrs. Johnson worked for many years at Providence Public Library and MIT College before joining the primary staff at WPI Library, now Gordon Library. Over the next 44 years she worked for WPI where she served as the Reference and Interlibrary Loan Librarian until her retirement in 2005.

Mrs. Johnson was a long-time member of All Saints Church where she served on the Vestry, was President of the Nenana Group and was an usher. She was also a member of the Armenian Church of our Saviour where she volunteered in the Library, and served as Past President of the Worcester Women’s Club.

Diana had many interests including playing the piano, solving crossword puzzles, reading, and watching Jeopardy. She also enjoyed gardening, cooking, and baking toll house cookies for many gatherings. Diana loved to travel, including trips to various countries such as Russia, Austria, Germany, and England.

A Funeral Service will be held at 2:00pm on Saturday, June 17th at All Saints Church, 10 Irving St., Worcester. Burial will be at Hope Cemetery following the service. There are no visiting hours. Arrangements are under the care of CALLAHAN, FAY & CASWELL Funeral Home, 61 Myrtle St., Worcester. In lieu of flowers, donations may be made to the All Saints Church Memorial Fund.