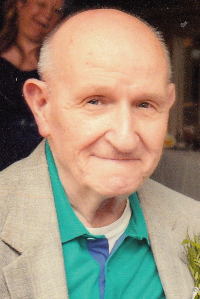 He leaves 2 daughters, Linda J. Cyr-Bibeau and her fiancé Paul Kubik of Webster, and Barbara K. Jeneral and her husband Jeffrey of Dudley; 3 grandchildren, Christopher Cyr of Pomfret, CT, Kelly Menghi of East Putnam, CT and Erica Spears of Webster; 4 great-granddaughters, Natalia, Savannah, Amelia and Star; a sister, Joan Comeau of Webster; an aunt, Gladys Przystas of Webster; several nephews and nieces. He was preceded in death by a brother, Albert Knych. He was looking forward to the birth of his 5th great-granddaughter in November.

He was born in Webster, the son of Albert J. and Agnes (Czechowski) Knych and lived here all his life. He graduated from Bartlett Trade School .

He was a Navy veteran of the Korean War and was a member of the Polish American Veterans.

Mr. Knych was a battery specialist at Norton Company in Worcester for many years, retiring in 1992.

He was a communicant of Saint Joseph Basilica. He belonged to the Booster Athletic Club. He had also been a member and past president of the Kosciuszko Club. He enjoyed golfing at the Roseland Golf Course in Woodstock, CT. He was a devoted fan of the Boston Red Sox and the New England Patriots.

The funeral will be held Friday, June 16, from the Sitkowski & Malboeuf Funeral Home, 340 School St., with a Mass at 10:00 AM in Saint Joseph Basilica, 53 Whitcomb Street. Burial will be in St. Joseph Garden of Peace. The Webster-Dudley Veterans Council will render the military honors at the cemetery. Visitation will be from 5:00 to 7:00 PM Thursday, June 15, in the funeral home. Donations in his name may be made to St. Joseph Basilica, 53 Whitcomb St., Webster, MA 01570.