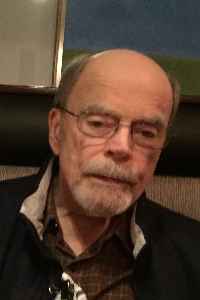 As a friend put it, his was “a life lived with energy and enthusiasm, a life well lived.” Called Shep or Al by his many friends, Mr. Boote was known for his wide ranging interests, from his passion for antique cars to his love of French and American art, hound dogs, classical music, politics, literature, writing, the collection of more than 200 celebrity autographs he collected as a young teenager, and his retirement career as an author of mystery thriller novels.

Born in New York City to Katharine and Alfred Denton Boote in 1929, the year of the stock market crash, Shep graduated from Trinity School there in 1947, and from Colgate University, Hamilton NY, in 1951 with a BA in political science. He also earned three graduate degrees including an MBA from Columbia University in 1953, where he joined the ROTC and then served as a U. S. Naval supply officer from 1954 to 1956 in Alameda, CA. He received an MA in sociology from Stanford University in 1957 while working in his chosen field of consumer products market research. After serving as Director of Market Research for PepsiCo in the Far East for two years and living in Hong Kong, he returned to the US in 1967 to become PepsiCo Market Research Director worldwide until 1970. Shep then went back to school at the age of 40 and earned a PhD in business and economics from Columbia University. This led to further positions at several firms, independent consulting projects and ultimately teaching at the college level.

In 1973 he married Heath Drury, his wife of 44 years. In Shep’s final years before retirement, he became a professor and taught at Hunter College in NYC, Nichols College, Dudley MA and Clark University in Worcester MA. This career change brought the couple to Woodstock CT where they lived for 25 happy years. While living there, Shep served as Justice of the Peace, was a member of the town’s Planning Commission and the Democratic Town Committee. As Justice of the Peace he performed numerous marriages and always donated his fee to The New Roxbury Land Trust in Woodstock. He called his project “Weddings for Open Space”. Then in retirement he wrote two suspense novels, House of Dead Dreams and An Evil Trust.

Alfred Roy & Sons Funeral Home 12 Hammond St. Worcester is assisting the family. To share a memory of Alfred or to sign the online guestbook visit www.Royfuneral.com.