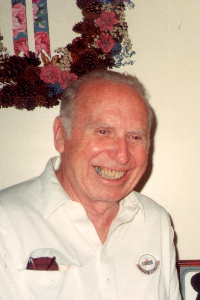 He was born August 18th 1921, in Worcester to the late Joseph J. & Etta (Callahan) Navin. He served in the U.S. Army from October 1943 to May 1946 and was an Honorably Discharged Veteran. He was a graduate of Worcester Boys Trade School and Worcester Junior College and attended management courses at the College of the Holy Cross. Vincent was employed by the Quincy Naval Shipyard, Pullman Standard Corporation, Jamesbury Valve Corporation and George F. Myers Manufacturing, as a Draftsman and NCI Controller. Vincent always took pride and finding satisfaction in his work, both professionally and at home.

Mr. Navin is survived by four sons; Vincent P. Navin II & his wife, Diane (Clark) of Somers, CT, Barry Navin of Provincetown, MA, Martin A.Navin and his wife Desiree (Kipfer) of Ottertail, Minnesota and James F. Navin of Ottertail Minnesota; his six grandchildren, Jesse, Stephanie, Catherine, Joseph, Timothy and Michael; as well as seven great-grandchildren and numerous nieces and nephews. He is preceded in death by his wife of 53 years, Ann Marie (Varney), his son, Jeffery A., a brother, Thomas of New Haven, CT and his sister, Kay (Navin) Dunn of South Weymouth, MA.
He never complained and was always thinking of others above himself. He was a kind and gentle man proud of his Irish heritage, his faith in the Roman Catholic Church, one who never showed anything other than kindness, humility and integrity. He was an avid Genealogist, devoted husband, father, grandfather and great-grandfather whose greatest joy was

spending time with family at gatherings and holidays. His bright blue eyes and boisterous laugh will echo in his loved one’s memories forever.

There are no calling hours. A graveside memorial service will be held at Pine Grove Cemetery, Boylston at the convenience of the family.