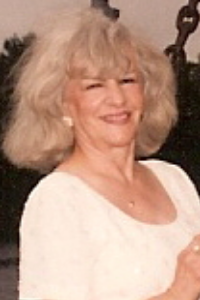 LEICESTER: Ellen M. (Johnson) Gregus, 86, of Leicester passed away peacefully, after a short illness on Thursday, June 1 in St. Vincent Hospital in Worcester.
She was the wife of Joseph J.Gregus, Sr. who died in 1999. She leaves her devoted son, Joseph J. Gregus, Jr. of Leicester and his beloved companion Pauline M. Norris of Rutland, a brother Ronald P. Johnson and his wife Kristina of Worcester, a sister Joanne E. Arsenault and her husband Lionel of Holden, a niece and three nephews.
Born in Leicester, she was the daughter of Arthur H. and Sylvia A. (Harju) Gregus and later graduated from Commerce High School in Worcester, Class of 1949. She once worked at Paul Revere Life Insurance Co. in Worcester in the actuary department. She was a homemaker for most of her life.
Ellen was very active in the community. She was a Eucharistic Minister at St. Pius X Church and a member and past president (1998-2000) of the Leicester Woman's Club. She was a member of the Leicester Garden Club and a member of the Frohsinn Club of Shrewsbury where she enjoyed dancing every Saturday evening.
A philanthropist at heart, she was a donor to the Leicester Public Library Renovation Fund Capital Campaign, the Diocese of Worcester annual Partners in Charity Appeal, and Friends of the Cursillo, a patron member of the Hanover Theater for the Performing Arts and a supporter of its Access to the Arts Fund. She was also a contributor to the YWCA of Central Mass. "Camp Wind-in-the-Pines" Camper Scholarship Fund, Worcester's Friendly House, Inc. "Set for Success" Program and supported runners and walkers of the Boston Marathon and the Jimmy Fund Walk. She was a strong supporter of the Worcester County Food Bank and the Leicester Food Pantry at St. Joseph's Church.
Private funeral services will be held at the convenience of the family with a funeral Mass in St. Pius X Church, Leicester. Burial will follow in All Faiths Cemetery, Worcester. There are no calling hours. The MORIN FUNERAL HOME, 1131 Main St., Leicester is directing arrangements for the family.
Memorial remembrances in her name may be made to the Leicester Food Pantry, 759 Main St., Leicester, MA 01524.