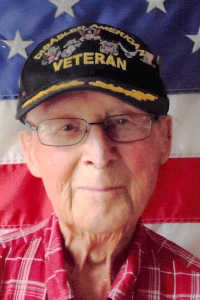 
On the afternoon of May 31, 2017, Bradford L. Howlett, of Worcester, passed away. He was 101 years old. A veteran who served in the United States Army during World War II, he landed on Utah Beach 14 days after the invasion of Normandy. He was in the 8th Division and served as a medical technician for only 14 days. He was a medic basically for the battalion; he said "I was assisting a patient, bandaging him when I was hit." He went down with several shrapnel wounds to his right arm, was evacuated to England and eventually to Ft. Devens where he spent six months recovering before he was mustered out of the Army. For his heroic actions, he was awarded the Purple Heart. Partially disabled, he returned home and worked for a wooden mill in Connecticut where he had worked before the war. He got married to the former Florence R. LaValle and enjoyed 45 happy years until her passing in 1993.
For his 100th birthday, he received a Key to the City from Worcester Mayor Joseph M. Petty and a letter of congratulations from President Barack Obama thanking him for his service.
At the age of 40, he decided to put his medical skills to use and went to work for Memorial Hospital in Worcester, where he worked for 30 years as a Licensed Practical Nurse. Mr. Howlett said he enjoyed every day. He would join his friends for breakfast at the Gold Star Restaurant and eat supper at another restaurant in Webster Square. If the weather was good, he could be found sitting in his yard, possibly reading or just relaxing and enjoying life. He was still driving his car until Valentine's Day of this year.
He was born in Nashua, NH, the son of Arthur and Edna (Walcott) Howlett and was a faithful member of Christ the King Parish and the VFW.
He was predeceased by his wife, Florence R. (LaValle) Howlett in 1993. He leaves a son, Michael J. Howlett and his wife Lynne of Worcester; a granddaughter, Christina M. Perez of Woburn; a grandson, Jeffrey M. Howlett of Worcester; three great grandchildren, Joell Perez and Jacob Perez of Woburn and Jace Howlett of Cape Cod; and a niece, Jennie Funaiole and other family members from West Townsend.
His funeral is Wednesday, June 7th from O'CONNOR BROTHERS FUNERAL HOME, 592 Park Avenue, with a Mass at 10:30 a.m. in Christ the King Church, 1052 Pleasant Street. Burial will follow in Notre Dame Cemetery. Calling hours are Tuesday, June 6th from 4:00 until 7:00 p.m. in the funeral home.