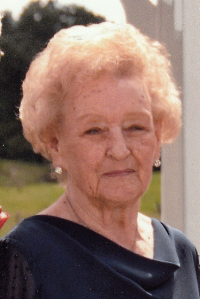 She leaves a son, Brian A. Reynolds and his wife Wanda of Webster; 4 grandchildren, Patrick Reynolds, Christopher Reynolds, Carrie B. Verdone and Amy M. Verdone; 6 great-grandchildren; and 2 great-great-grandchildren. She was preceded in death by a daughter, Pamela L. “Pam” Reynolds in 2016 and by 2 sisters, Irene Martel and Florence Parent.

She was born in Dudley and raised in Webster, a daughter of Stephen T. and Mary S. (Napierata) Chmielewski. She graduated from Bartlett High School in 1944.

“Mimi” first worked in the office at the American Optical Company in Southbridge. She then was a clerk in the assessor’s office in the Town of Webster for many years and in the Town of Sturbridge for 4 years. She retired in 1988.

She enjoyed reading. Her family was her treasure, especially the grandchildren.

No funeral services are planned. Donations in her name may be made to the Webster Animal Control Center, 350 Main St., Webster, MA 01570. Arrangements are under the direction of Scanlon Funeral Service, 38 East Main Street.