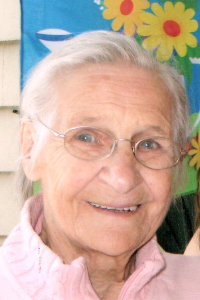 WORCESTER-Arlene A. (Carlson) Anderson, 95, a loving and devoted mother, grandmother and great grandmother, died Wednesday, May 24, 2017 at home, surrounded by her loving family. She was predeceased by her husband of 54 years, Ralph S. Anderson in 1997 and her granddaughter, Amanda Keith in 2004.

She was born in Worcester, daughter of Erick Levi and Ellen (Mallquist) Carlson and graduated from Commerce High School. Arlene was predeceased by her brothers, Harold and Roy Carlson, and sisters, Ruth Adrian and Shirley Pelletier. She was a lifelong member of Quinsigamond United Methodist Church where she sang in the choir for many years, and was a member of the Women’s Society. Arlene enjoyed gardening, taking walks, music and most of all, spending time with her family.

A Funeral Service will be held at 10:00 am on Saturday, June 3rd at Quinsigamond United Methodist Church, 9 Stebbins Street, Worcester. A gathering will be held in the Fellowship Hall at church immediately following the service. Burial in All Faith’s Cemetery will be private. There are no calling hours. Arrangements are in the care of LINDQUIST LUNDIN Funeral Home, 36 Butler Street, Worcester.

In lieu of flowers, donations in Arlene’s memory may be made to Quinsigamond United Methodist Church or to a charity of the donor’s choice.