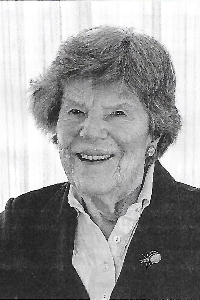 
Worcester: Marianne Jenner Shellabarger Jeppson, born in Princeton, New Jersey, November 21, 1920, died on May 21 in her home. Her mother Vifvan Georgia Lovegrove Borg and her father Samuel Shellabarger had three children: Marianne, her sister Ingrid Shellabarger Rea and brother Eric Shellabarger, who both predeceased her. Marianne was exactly ninety-six and a half years old.

When her hypothetical obituary was discussed years ago, she requested the following: “Marianne Jeppson: Dead.” Since obituaries are charged by the word, she figured the money could be put to better use—such as donating to her myriad charities or supporting her extensive family. We could only sneak this in now that she cannot protest.

Marianne lived in Europe much of her childhood, attending boarding school at the age of seven in England with her family based in Lausanne, Switzerland. She graduated from Katie Gibbs in New York and used her secretarial skills to type manuscripts for her best-selling author father. She was late to her own wedding to John Jeppson in 1947 as she finished the manuscript for "Prince of Foxes."

When the USA entered World War II in 1941, Marianne was quick to join the Red Cross Clubmobile. She followed Patton’s army at the front in Europe, driving a two-ton truck and cheering the troops with donuts and cigarettes. Many marriage proposals were proffered but she chose John Jeppson with whom she led a very full life in Worcester and Brookfield, Massachusetts, for more than sixty years. Two children came ready-made with the marriage: John Jeppson III and Julie Jeppson Stout, and two came later: Eric Jeppson and Ingrid Jeppson Mach. Their spouses, Nancy Fifield Jeppson and Dany Pelletier sometimes “took care of her better than her own children” and she loved them and her generous and spirited new daughter-in-law, Wendy Benchley, dearly. Her beloved grandchildren include: Craig, Carder, Antonia and Julie Stout; Nathaniel, Bree and Jake Jeppson; Sam and Pam Jeppson. The icing on the cake was her seven great grandchildren and the recent announcement of another on the way. She adored her nieces and nephews and kept them always in her heart.

Marianne supported many organizations in Worcester including the American Red Cross, Mass Audubon, Clark University, Bancroft School, Tower Hill Botanic Garden, Music Worcester, American Antiquarian Society, Trinity Lutheran Church and the Worcester Art Museum and served on the board of Old Sturbridge Village. For recognition of their service and commitment, she and John received the Worcester Art Museum’s Salisbury Society Award in 2011. Her associations included the Worcester Garden Club, Hall Club and Thursday Club. She was an early volunteer for Planned Parenthood serving as an escort for young women in downtown Worcester.

Marianne had two maxims: “Family First” when it came to supporting us through thick and thin, and “Family Hold Back” when it came to her regard for her friends and community. She was generous, kind, and fearless and will be missed.

In lieu of flowers which she loved but “wouldn’t enjoy when she was dead,” donations can be made to The American Red Cross, Worcester Chapter, 2000 Century Drive, Worcester, MA 01606.
To leave an online condolence message, please click link.