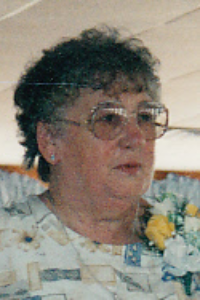 She leaves 6 children, Cheryl P. Kuchachik and her husband John of Ashland, Jeanne M. Nalewajk and her husband Bruce of Harrisburg, NC, Thomas F. Watson III of Webster, Darlene T. Robinson of Plainfield, CT, Christine L. Watson of Northborough and Daniel F. Watson of Worcester; 15 grandchildren; 4 great-grandchildren; 4 sisters, Barbara Burns, Janet Ozak, Ellen Stinchfield and Arlene Denham, all of Webster; 5 brothers, Gary Denham, Francis “Butch” Denham, Albert Denham and John Denham, all of Webster, and Kenneth Denham of Indiana; many nieces and nephews. She was preceded in death by her son Mark A. Watson of Webster in 2006 and by her 4 brothers, Frederick J. Denham, Jr., Edward Denham, Ronald Denham and Richard Denham.

She was born in Worcester and raised in Oxford, a daughter of Frederick J. Denham, Sr. and Helen E. (Gagnon) Denham. She lived in Webster for about 40 years before moving to Dudley in 2006.

Mrs. Watson worked as a food server at Hubbard Regional Hospital for several years before retiring in 1994. She was a former member of the Church of the Reconciliation in Webster.

Visitation will be held from 5:00 to 7:00 PM Wednesday, May 24, in Scanlon Funeral Service, 38 East Main Street, Webster, followed by a service there at 7:00 PM. The Reverend Janice C. Ford will officiate.