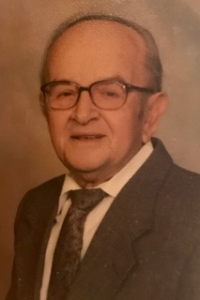 He was born in Tsamantas, Epirus, Greece, on August 21, 1933 to Fotios and Varvara (Pappas) Pantazis. His brothers Spiros and Nicolas, along with his sister Georgia, predeceased him. He emigrated to this country in 1951 and worked for many years at Table Talk Co., retiring in 1994.

He leaves his wife, Filanthi (Karagianis), two sons, Pavlos of Worcester, and Fotios of West Palm Beach, Florida, a daughter Marina Prifti of Paxton, her husband Michael Prifti, and four grandchildren; Nicole and Alexander Pantazis, and Danielle and Peter Prifti.

He loved his family, and enjoyed his retirement and his beloved Red Sox.

The funeral will be held on Thursday, May 25 from CALLAHAN FAY CASWELL Funeral Home, 61 Myrtle Street, with funeral services at 11:30 AM at St. Spyridon Greek Orthodox Cathedral, 102 Russell Street, Worcester. Burial will follow at Hope Cemetery.

In lieu of flowers, donations may be made to St. Spyridon Greek Orthodox Cathedral, 102 Russell Street, Worcester, or to the American Diabetes Association.