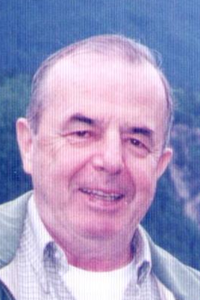 John Patrick O’Loughlin, a resident of Worcester, passed away peacefully on Sunday, May 21st at Saint Vincent Hospital in Worcester after a period of declining health with his wife at his side.
The son of Irish immigrants, John and Helen O’Loughlin, Jack was born on September 20, 1935 and was raised in the Grafton Hill area of Worcester. He was a graduate of Saint Stephen’s High School. Jack was employed as a manager in the Iandoli Markets and also worked for Leo Construction. His most recent employment was with the City of Worcester School Department. In his earlier years, Jack was a member of the Army National Guard.
In addition to his wife Mary Rita (Horgan) O’Loughlin of Worcester, MA, Jack is survived by his son Steven C. O’Loughlin of Charlton, MA who was always there for Jack and was consistently supportive and present by his side during his recent illness. He is also survived by Steven’s wife Jennifer O’Loughlin and their children, his much loved grandchildren, Alishya, John, and Eric O’Loughlin of Charlton, MA of whom Jack was extremely proud. He is also survived by his son Kevin B. O’Loughlin of Dorchester, MA and his daughters Mary M. O’Loughlin of Auburn, MA and Tara B. O’Loughlin of Worcester, MA. Jack was predeceased by his oldest son John F. O’Loughlin. Additionally, he is survived by his brothers Michael O’Loughlin and his wife Peggy and James O’Loughlin and his wife Pat of Worcester, MA as well as his sisters Elizabeth Pusateri of Holden, MA, Kathleen Bianchi and her husband John and Maryellen Foley and her husband Joseph of Worcester, MA and his close friends, Mary’s brothers, Rev. John E. Horgan of Shrewsbury, MA and William F. Horgan and his wife Theresa of Worcester, MA and several nieces and nephews.
The family would like to extend their sincere appreciation to the staff of the Intensive Care Unit and 34 North at Saint Vincent Hospital for the excellent care, kindness, and compassion shown to Jack in making him as comfortable as possible during his illness.
The family has chosen Fay Brothers Funeral Home in West Boylston, MA to assist them with Jack’s service. Jack’s funeral Mass will be celebrated on Wednesday, May 24th at eleven o’clock a.m. in Saint Stephen’s Church on Grafton Street in Worcester, Ma. There are no calling hours. The family requests that flowers be omitted. If so desired, memorial contributions may be made in honor of Jack’s life to the Priests’ Retirement Fund of the Diocese of Worcester, 49 Elm Street, Worcester, MA 01609.