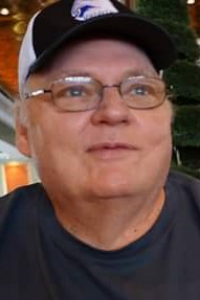 WORCESTER__Kevin Ligouri, 59 of Worcester, formerly of Framingham passed away peacefully on Saturday May 13, 2017 in his home. He leaves his wife, Heidi Rousseau Ligouri, his son, Matthew Tyler Scott Rousseau, his daughter, Erin Cathryn Pearl Ligouri all of Worcester; a grandson, Ryan Dillon James Ligouri of Worcester; a sister, Carolann Nordfeldt and her husband John of Framingham; a dear friend, Lisa Dumais of Worcester; Heidi’s two other sons who were close to his heart, Ethan Henry Isaiah Rousseau and Mason Alexander Thomas Rousseau.
He is also survived by nieces, nephews and many friends who adored him. Kevin was predeceased by his first wife Kathryn M. (Hohn) Ligouri, a brother, James Ligouri and two sisters, Susan M. McNichol and Claire Dykes. Kevin was born in Boston a son of James P. and Lorraine R. (Riordan) Ligouri and was raised in Framingham. He has lived in Worcester for 20 years. Kevin was a graduate of Newbury College, where he frequently made the Dean’s list. He was also recognized on Who’s Who Amongst Students during his time there. He worked as an ink technician for Avery Dennison Corp. in Framingham. He worked there many years before he retired.
Kevin was an avid sports fan, his favorites were the Red Sox and the New England Patriots. He also followed the Celtics and Bruins. Every year in his home the Super Bowl was a huge event that many of his family and friends enjoyed. Kevin would cook all day For the Super Bowl. He was ecstatic during the last one when the Patriots made a huge comeback and won the game!
Kevin enjoyed staying up to date on world events, he never missed the news. He enjoyed watching reality television shows such as Greatest Catch, Undercover Boss, Gold Rush, Tanked and Pawnstars. He loved TV, and even his sixty five inch flat screen started to become too small to him.
Holidays were major events for Kevin, he looked forward to surprising the kids at Christmas and watching their faces light up. On holidays he spoiled everyone, especially his Grandson Ryan, and Ethan and Mason. Kevin always referred to the boys as “my little buddy” “my best friend”. One of Kevin’s other favorite holidays was Thanksgiving , boy was he always proud of his Turkey! Kevin enjoyed taking yearly family vacations, they were some of the happiest times of year for him.
Kevin loved to cook almost as much as he loved his family. We have countless photographs of him smiling over a stove with a spatula in his hand. He often cooked so many great dishes. Kevin was the chef of the house!
Kevin’s greatest accomplishments were his children and his grandson. Throughout the years Kevin never missed any sports games or school functions. He was an amazing family man, and always put his wife and children first. He had the best sense of humor, and always had something uplifting to say when people were feeling down, or sad. Whenever his children Matt, and Erin needed advice, he was always there to show the way. He was the glue of our family, our rock.
Calling hours for Kevin will be held on Wednesday May 24, 2017 from 6:00 to 8:00 P.M. in DIRSA-MORIN FUNERAL HOME, 298 Grafton St., Worcester. His funeral Mass will be held on Thursday May 25, 2017 at 10:00 A.M. in St. Stephen Church 251 Concord Rd., FRAMINGHAM. Burial will follow in All Faiths Cemetery, Worcester. In lieu of flowers memorial contributions may be made for his Grandson Ryan Ligouri in care of Erin Ligouri 76 Providence St, Worcester MA 01604.