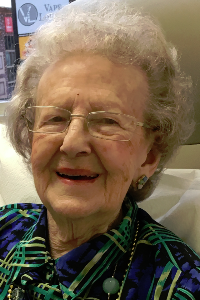 WORCESTER--Shirley Jane (Svedine) Elbe, 92, of Worcester passed away peacefully on Thursday, May 18, 2017, at St. Vincent Hospital in Worcester.

Born in Uxbridge, Shirley was the daughter of the late Francis Svedine and Cora (Suydam) Svedine. She leaves her son, Robert F. Elbe, of Berlin VT; three sisters, Betty Heavey of SC, Virginia Monahan of FL, and Harriet Getchell of NM; Shirley was predeceased by a sister, Gertrude Ottiviano, and a brother, Donald Svedine; she also leaves two grandchildren, David Elbe of Las Vegas, NV, and Wendy Elbe of Hayes, VA. Shirley was predeceased by her husband, F. Henry (Hank) Elbe, who passed away in the year 2000, to whom she was married for 55 years. During Shirley’s lifetime, her circle of friends was enormous.

Following graduation from Commerce High School, Shirley began her working career in the Circulation Dept. of the Worcester Telegram after which she worked for over 20 years at Paul Revere Life Insurance Co. in the Human Resources Dept. in charge of Salary Administration and Retirement Counseling.

Shirley was the longest-living member of Park Congregational Church, having joined in 1940. Her church life encompassed serving as a deacon for 30 years, having been the only woman to be named Deacon Emerita in the church’s history. Shirley was active in Park Church Fellowship, its 50/50 Club, Bible Study, and in her earlier years taught Sunday School. She was often heard saying, “The church is my life.”

Shirley’s interests included studying art at the Worcester Art Museum and serving in the Emblem Club, the Eastern Star, and Amaranth, the latter two occupying the position of Past Matron. Shirley and her husband enjoyed dancing their entire life, having met one another at a Knights of Columbus dance.

A funeral service for Shirley will be held on Thursday, May 25, 2017, at 12 noon preceded by visiting hours from 10am – 12pm in the sanctuary of the First Baptist Church, 111 Park Ave., Worcester, with The Reverend Dr. Gary R. Shahinian, Pastor of Park Congregational Church, officiating. Burial will be in Rural Cemetery.