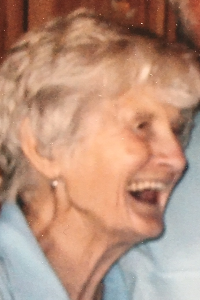 The little leprechaun was born on March 17, 1925 at Saint Vincent Hospital in Worcester Massachusetts. As well as being an academic, she was an avid athlete and member of the softball and basketball teams for the Auburn High School Class of 1943. Barbara received an Associate of Science in Nursing from Allan Hitchcock College in Santa Maria, California in 1983. She brought joy and comfort to her patients throughout her nursing career. She was a lifelong student of diverse enrichment learning. History, art, creative writing, and music were favorites of hers well into her octogenarian years. She attended classes at local colleges and universities wherever she happened to be living at any point in her life, from Ilion, New York to Sandy, Utah, and Santa Barbara, California to Prescott, Arizona.

Barbara loved to laugh as much as she loved her family. Both her smile and laugh were delightfully infectious and impossible to forget. She brought them with her wherever she went and generously shared her energetic and compassionate spirit with those around her.

“Babs” loved to travel and was always planning her next adventure. As the self-proclaimed activity and entertainment director for her family, she could spend hours regaling any crowd with tales of her visits to Europe, or her road trips traversing North America. Aging didn’t squelch her adventurous spirit as she was still planning a trip to China until the very week she passed away.
She was a young widow, predeceased by her husband and forever love, Edward Leroy Jock. She is survived by their four beloved children, Dana and Janice Jock of Cooperstown, NY, Kathleen Wilson of West Boylston, MA, Timothy and Laura Jock of Camden, NY, and Christopher and Darlene Jock of Rochester Hills, MI. Her 11 grandchildren and 9 great-grandchildren were a constant source of pride for her. Tim, Heather, Heidi, Dan, Joe, Matt, Ryan, Bill, Kristen, Jason, and Kevin will greatly miss their Grandma Jock; she touched them greatly and influenced their lives beyond measure. Her great grandchildren will sorely miss her, her love of sports, and constant support. Whether taking the pitching mound and offering valuable softball lessons in fielding and batting, wild cheering from the bleachers at the hockey arena, demonstrating an impressive crossover dribble, offering swim lessons, or kicking the soccer ball around at age 90, she facilely impressed them all with her own skills, inspired coaching, and boundless energy.

She was predeceased by two of her 3 brothers, Richard and George Elliott as well as her second husband Robert Winter of Nipomo, California. She is survived by her seven other siblings, older sister Helen Taber and younger siblings Rita Gudgeon, Christine Lang, John Elliott, Jane St Jean, Angie Mahoney, and Patricia LaChapelle. Her numerous nieces and nephews speak of her as their second mother and will sorely miss her vivacious spunk, infinite generosity, and gentle kindness.