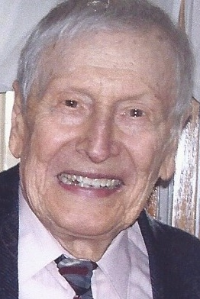 Alphonse G. York, 97, died peacefully on Wednesday, May 10th. He leaves his sister, Victoria (Yakimovich) Kusy of Auburn and many nieces and nephews. He was predeceased by his wife of 59 years, Theresa (Toloczko) York; a brother, Michael Jason and sisters, Stephanie Amato, Wanda Holawy and Tess Chasey.
Mr. York was born in Chelsea, MA the son of Walton and Sabina (Szabunia) Yakimovich. He was educated in the Worcester Public Schools, earned as Associate Degree from Worcester Junior College and a Bachelor of Science Degree from Northeastern University. Early in his career he worked as a production planner and sales supervisor at Wyman-Gordon Company and retired from the City of Worcester where he worked in personnel management.
Mr. York was a veteran of the United States Army, serving in World War II, Battle of the Bulge. He received a Bronze Star Medal and Bronze Service Stars during his service in the 309 Engineer Combat Battalion of the 84th Infantry Division. Mr. York was a member of Christ the King Church, American Legion Post 341, Battle of the Bulge Veterans of Central Massachusetts, Retired Members of Greendale and former commander of the Alfred Landin Post of Auburn.
During his retirement, Mr. York traveled the world with his wife and played guitar for his family, friends, and organizations. An avid reader, he made a point of staying well-informed and enjoyed discussing current events and politics with his nephews.
His funeral is Wednesday, May 17th from O’CONNOR BROTHERS FUNERAL HOME, 592 Park Avenue, Worcester with a Mass at 11:00 AM in Christ the King Church, 1052 Pleasant Street, Worcester. Burial will follow in Notre Dame Cemetery. Calling hours are Wednesday, May 17th from 9:30 until 10:30 AM in the funeral home. In lieu of flowers memorial contributions may be made to the Visiting Nurses Association, 120 Thomas Street, Worcester, MA 01608.