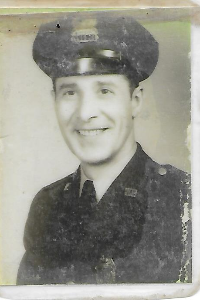 Worcester: Raymond M. Kary, 91, a retired Worcester Police Officer, passed away on Tuesday, May 9, 2017 at home surrounded by his loving family. He leaves 3 children- Michael R. Kary, Donna M. Kary and her companion Calvin Curll, and Raymond J. Kary and his wife Marge; 4 grandchildren-- Theresa, Sheila, Stephen and his companion Jenelle Jones (with whom he lived), and Sarah; 4 great-grandchildren- Chelsea, Alyia, Ryan, and Bryan; a brother- Alfred P. Kary and several nieces and nephews. Ray was predeceased by his wife of 64 years, Betty M. (Fields) Kary, a daughter Frances Kary, and a brother Norman Kary.

Ray was born in Worcester, son of the late Michael and Anna (Derderian) Kary. He proudly served his country in the United States Marines during both WWII and the Korean War and was the recipient of 2 purple hearts. He worked as a police officer for many years for the Worcester Police Department. He was a member of St. Joan of Arc, the Massachusetts Police Association, the DAV, the IBPO, and the Marine Corps League. The family extends its thanks to the VNA Hospice, especially nurse Regina Cunningham and Dr. George Groussis for their professional and compassionate care of Raymond.

Calling hours will be held on Tuesday, May 16, 2017 from 5-8 p.m. in Nordgren Funeral Home 300 Lincoln St. Worcester. A funeral Mass will be held on Wednesday, May 17, 2017 at 11:00 a.m. in St Joan of Arc Church 570 Lincoln St. followed by committal and military honors at Worcester County Memorial Park, Paxton. In lieu of flowers, memorial donations may be made to the Worcester Animal Rescue League. For directions or to leave a message in Ray's online guestbook, please click link.