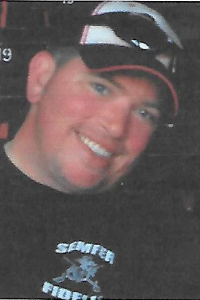 
WORCESTER –Kenneth Charles Dunker, 40, of Worcester passed away suddenly in his sleep on Wednesday, May 10, 2017 after suffering a heart attack.

He is survived by his wife of 15 years Adria (Tsourides) Dunker, and their daughters Alissandra, twins Madison and Amelia, and his son Collin Dunker all from Worcester. He is also survived by his parents Kenneth and Maureen Dunker of Princeton, his sister Erin Lewis and her husband Mark from Paxton, his mother-in-law Alice Tsourides, his brother-in-law Marc Tsourides and his wife Holly from Worcester. In addition, he is survived by nieces Alexa, Norah, and his nephew Ethan, and several aunts, uncles and cousins.
Kenny was predeceased by his father-in-law Paul Tsourides of Sutton, his Grandparents Robert and Florence Gray of Dennis, and Dorothy Dunker of Holden.
Kenny attended Thomas Prince School in Princeton, graduated from Wachusett Regional High School and attended Worcester Industrial Technical Institute. He worked for many years at USA Marine starting as a young teenager in the yard as a helper moving boats around and eventually working his way up to running the yard crew and working in the service department. He eventually excelled at sales and took great pride in customer service; always going the extra mile to ensure a satisfied customer.
Kenny enjoyed following all of the home teams, especially watching the Red Sox and the Patriots, NASCAR and Fox News on TV with his family and the family dogs. He was so proud of his children in everything that they did and especially loved watching them play softball and participating in karate tournaments. Kenny enjoyed spending time at Cape Cod and in Maine fishing and boating. He always had a knack for putting a smile on your face and will forever be remembered for being a fun loving guy that you were glad you had a chance to share your time with.
Calling hours will be held at the Nordgren Memorial Chapel, 300 Lincoln St., Worcester on Sunday May 14th from 5 to 8 p.m. The funeral will be held on Monday, May 15th, from the funeral home with a Mass at 10:00 a.m. at Saint Spyridon Greek Orthodox Church, 102 Russell St, Worcester. Burial will follow at Hope Cemetery in Worcester.
In lieu of flowers, donations may be made to St. Jude's Children's Research Hospital, 501 St. Jude Place, Memphis, TN 38103, or to the American Heart Association 7272 Greenville Avenue, Dallas, TX 75231-4596. Please keep Kenny in your hearts and prayers.