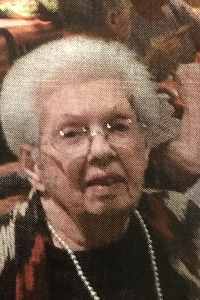 Ann E. (Dunn) Nichols, 97, formerly of Grafton and Worcester died Monday, May 8th in Beaumont Nursing Center, Westborough after a long and courageous battle with Alzheimer’s Disease. Her husband of 67 years, Frank P. Nichols died in 2008. She leaves a son, Robert F. Nichols and his wife, Candace of Paxton; a daughter, Penelope N. Sullivan of Newton; 4 grandsons, Charlie, Tim, Greg and Brian; a great grandson, James and several nieces and nephews. She was predeceased by her son-in-law, Charles Sullivan; a brother, James J. Dunn and a sister, Frances L. Deckel.
She was born in Worcester the daughter of Frank L. and Anita E. (Allard) Dunn and graduated from the former High School of Commerce. Ann was a founding member of St. Andrew the Apostle Church and was a volunteer at the Fallon Clinic in Westborough for many years. Mrs. Nichols worked for Stop & Shop for 30 years as a cashier, retiring in 1993. She was devoted to her family especially her grandchildren who were the apple of her eye. In her later years, Ann traveled the United States and Europe extensively.
Her funeral is Friday, May 12th from O’CONNOR BROTHERS FUNERAL HOME, 592 Park Avenue, Worcester with a Mass at 10:00 AM in St. Andrew the Apostle Church, 5 Spaulding Street, Worcester. Burial will follow in St. John’s Cemetery. Calling hours are 8:30 until 9:30 AM in the funeral home. In lieu of flowers memorial contributions may be made to the Society of the Little Flower Spreading Devotion to St. Therese of Lisieux, 1313 N. Frontage Road, Darien, Illinois, 60561.